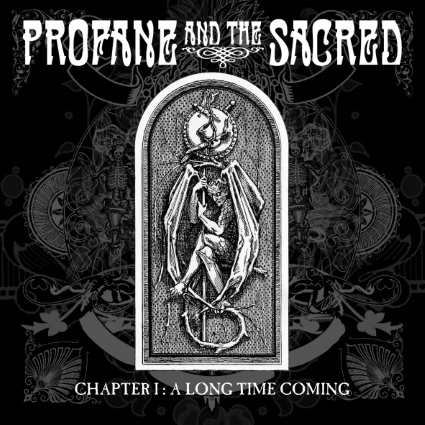 London based stoners make huge statement on their debut record

Late last year a single arrived to MVM towers. A new band, that we’d never heard of. The accompanying blurb namechecked bands like Orange Goblin, Corrosion Of Conformity and Clutch. This type of phrase always gets us just a little excited, but the best thing was that such an idea wasn’t just fanciful PR speak, and the single “From The Top” was absolutely spectacular, full of downtuned almost Goblin like glory.

The band was called Profane And The Sacred and fast forward a couple of months and it’s time for the album. And, glory be, if “From The Top” was a tasty entree, then just wait until you hear what’s on the full menu.

This four piece: Luke Alleeson – Vocals, guitar, Rick Spooner – Guitars, Rob Taylor – Bass guitar and Kieran Smith – Drums have concocted something that almost seems to have burst out of nowhere on a wave of huge groove.

Take the opening track “Bench.” It’s lengthy, it’s weighty, it’s heavy and oppressive, and it’s absolutely superb. Starting off with some acoustic grooves is all very nice, but it’s soon into a wave of riffs and Alleeson’s vocals are perfect for this sound.

Pleasingly there is no let up elsewhere either, “Bleed That Stone” starts off with a guitar line which is reminiscent of C.O.C’s “Albatross” and has some fine twin guitar in its chorus as it rumbles and rattles along, while “You Know” is nothing more than an exercise in superior heavy metal songwriting. That you can imagine Down singling it as a room of people bounces is meant entirely as a compliment.

An album with absolutely no weak (in all senses of the word) points, “Long Time Coming” grooves along. The sledgehammer chorus of “All For None” is leavened by its fast verses, while the near seven minute (actually it’s striking just how long most of these songs are) “Just A Little” builds up into something wonderful and new single “Words” – itself over seven minutes long – kicks off with a bass groove that would rumble stadiums and is the best thing here. Trust us, that’s praise indeed.

It comes as something of a shock that the record concludes with an acoustic instrumental, but nonetheless, with “A New Leaf” that’s exactly what happens. Even stranger is that it works.

Profane And The Sacred, then. It’s not stretching things too far to say that they could just be your favourite new band. With “Long Time Coming” they have created something that frequently touches on the brilliant. The scary thing is, this is only Chapter One.