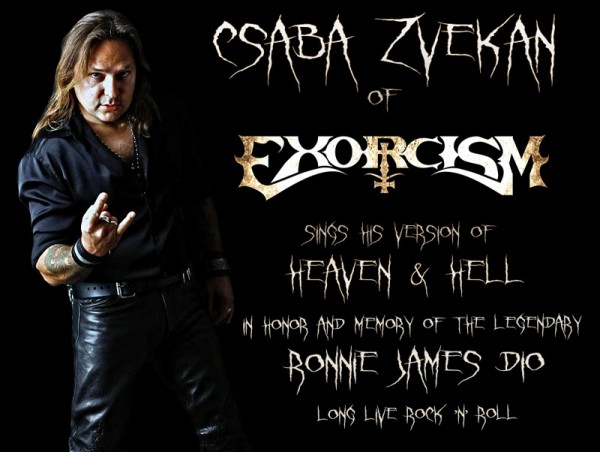 CSABA ZVEKAN of EXORCISM released a tribute video and sings his version of “Heaven And Hell” in honor and memory of the legendary ‘RONNIE JAMES DIO‘. The song will be included in the EXORCISM live set. The video can be viewed below.

CSABA ZVEKAN comments: “A tribute song for one of the greatest singers, if not THE best. Certainly a strong influence in my work for EXORCISM. RONNIE JAMES DIO your music lives on and on and on … it’s heaven and hell.

CSABA ZVEKAN is a musician, singer, producer and better known as the singer for EXORCISM, METAL MACHINE,RAVEN LORD, SARDONYX, ROUGH ANGEL and EMERGENCY. He was also the singer and songwriter for KILLING MACHINE during (2008–2011).

CSABA ZVEKAN played and/or recorded in the past with members of Kiss, Black Sabbath, Ozzy Osbourne, W.A.S.P.,Anthrax, Great White, Steve Vai and The Black Crowes among others.