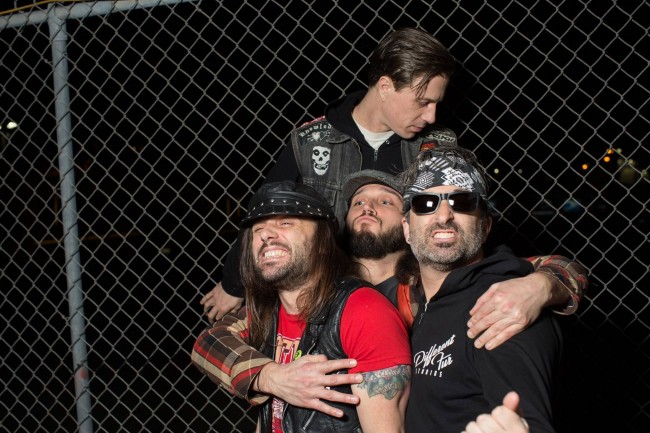 Flexx Bronco’s style is an authentic mixture of melodic punk rock n’ roll dialed in with the outlaw aesthetics of the country and blues genres.  If Andrew W.K. was featured on the collaborative album that Steve Earle and The Supersuckers did together, it would parallel all that Flexx Bronco is. Their music is no gimmick/real thing rock n’ roll that is perfect fuel for the heaviest of  bender’s and still makes an adequate soundtrack for nursing the hangover and recollecting the previous nights activities, all at the same bar.  Their lyrical content is derived from their past experiences on tour and personal lives, their current dealings in life and the lifestyle choices they pursue. Flexx Bronco writes music for everyone, whether you’re white collar working a 9 – 5 behind a desktop trying to make the rent or a blue collar about to go in for a 12 hour graveyard shift to help settle some medical bills, Flexx Bronco truly has something for everyone who is a rock n’ roll fan.

Volume 3 is their latest offering after a six year hiatus from the last album (properly named Volume 2).  The Flexx guys kept all aspects of the project in the confines of the Bay Area with recording and mixing at Different Fur Studios in San Francisco, CA and mastering and pressing done in Oakland, CA at Trakworx and 16 KHZ, respectively.  Volume 3 consists of twelve tracks that kick off a chugging instrumental called Mors Non Seperabit and shifts into full gear, balls out rock from there.  Mid album it takes a break and the Flexx guys channels their inner Bobby Darin for the 50’s songwriter inspired, reverb drenched ballad “Heart On The Floor” and Volume 3 comes to a conclusion with the high energy “Emerald City Is Burning.”

Since forming in 2001, they have played all over the US West Coast and Southwest which has included multiple invites and performances at notable SXSW music festival held in Austin, TX. Their live show and draw has secured them gigs with such names as Valient Thorr, Red Fang, Danko Jones, Sammy Hagar, Scott H. Biram, Riverboat Gamblers, The Supersuckers, Steel Panther, The Bronx, The Biters and tons more. Flexx Bronco is a known and reputable name in the SF hard rock scene to this day and packs their shows at established San Francisco venues such as Bottom Of The Hill and Thee Parkside. In 2008, they were voted by The SF Bay Guardian as “SF’s Favorite Live Punk Band” and were graced with “SF’s Best Live Band” by the SF Weekly upon the release of their last album Volume 2 back in 2009. The bands juxtaposition of old school work ethic and vivacious musical passion exudes in their dynamic stage shows, ensuring their fans a true rock and roll experience each time around. Flexx Bronco lyrics drench the soul like the first shot of bourbon to kick off an explosive night.