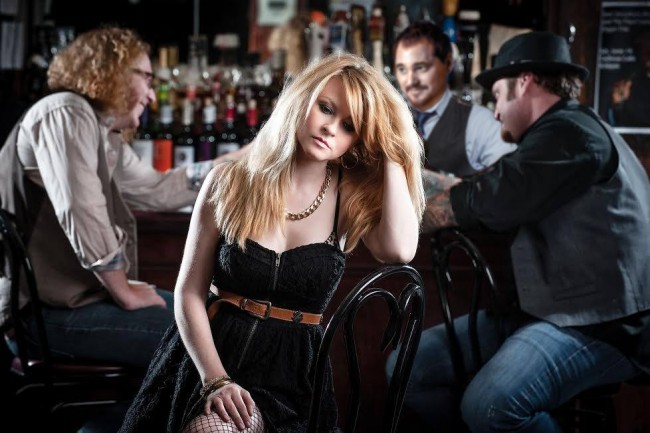 Jennifer Westwood and The Handsome Devils have just released their new record “Greetings From This Town.”

Jennifer Westwood cut her teeth on Detroit Gospel before hitting the gritty Detroit bars that set her career in motion. She has been a Detroit Music Award winner and nominee in several categories, and has contributed music to multiple Emmy Award winning commercials and documentaries, as well as film.

She first found confidence to consider music as a career by the encouragement of a church acquaintance, a professor of music who had previously served as ensemble choir director for the late Bishop C.L. Franklin, father of Aretha. Performing in church lead to her first work in the outside world, singing backup locally for Motown artist Carl Carlton (Bad Mama Jama). Studio work for various local artists followed, first in R & B and soul genres, followed by roots and blues. Those experiences gave her insight on the direction she wanted to embark on for her own music before leaping out on her own. It also opened doors for commercial work due to her vocal flexibility and enthusiasm. The same enthusiasm has driven each performance — whether it has been 7 ppl, on up to 70,000. Sharing the bill with rock icon Patti Smith at the world’s largest Masonic Temple have marked a highlight of her performance career.

Jennifer has fully embraced the character and spirit of Detroit; and considers her greatest accomplishment to be creating a career in music during some of the most troubling economic times for her hometown.

Jennifer’s band mates, Dylan Dunbar and JD Mackinder make up the Handsome Devils. On guitar, Dylan worked his way up the food chain through the Detroit area blues clubs and has worked with two WC Handy award winners, Chef Chris and Johnny Yard Dog Johns. Dylan has also recorded and toured with The Rumpshakers, Whitey Morgan, Dixie Hustler and The Orbtisuns. His ability to adeptly perform blues, rock, soul and country makes him the perfect compliment to Jennifer’s diverse ability. Dylan actually was an All State award winning jazz instrumentalist and had performed with Frank Montooth by the young age of 16.

JD Mackinder has spent the majority of the last 10 years on the road touring the world with Whitey Morgan and Deadstring Brothers (both of Bloodshot Records.) 13 full albums to his credit to this date and many guest appearances on others, JD is a pocket bass player, nothing flashy, just what he’s supposed to do. In addition to Deadstring Brothers and Whitey Morgan, JD has also recorded and toured with South Normal, Ryan Dillaha and the Miracle Men, Chelsea Crowell and just recently Hellbound Glory. He has also played bass for Rodney Crowell, Roseanne Cash, Richie Albright (Waylon Jennings Drummer), Fred Newell (Porter Waggoners guitarist), Eddie Spaghetti and had the honor of being the last bass player for the last surviving member of Hank Williams band, Don Helms before his death in 2008.

There are no musical limitations with Jennifer Westwood and the Handsome Devils. The skill set and accomplishments that each member has earned helps them create a format where no style is out of bounds. Somehow, it all sounds familiar, but unique all the same. Truly a melting pot of musical ability and knowledge, the band makes a statement with each note and the sky is the limit.