You Will Not Believe Your Exploding Eyes 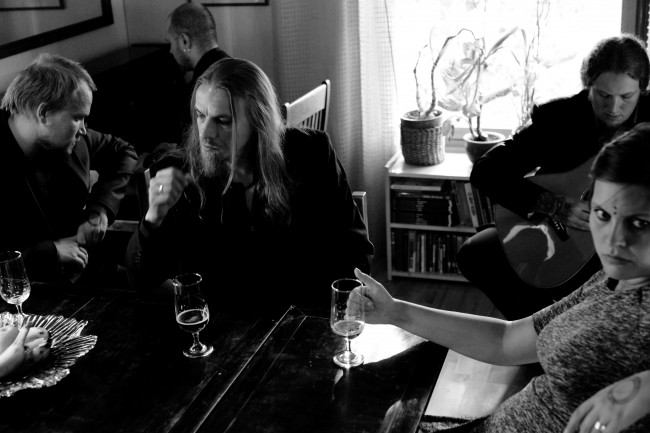 May 7, 2015
Reading time: 1 min.
Facebook
Twitter
Pinterest
WhatsApp
Linkedin
Email
Print
Telegram
Copy URL
By Andy Thorley
Thomas Corpse’ new band is no longer a side project
What started as a pastime for Jess and the Ancient Ones guitarist and songwriter Thomas Corpse has morphed into an actual band: The Exploding Eyes Orchestra. With a lineup consisting of five out of seven Jess and the Ancient Ones members, the band’s debut album, simply titled I, will hit the streets on June 15th via Svart Records (Witch Mountain, Messenger, Acid King)
According to Thomas Corpse, the idea behind the new combo was to find an outlet for material which the prolific songwriter found incompatible with the Jess and the Ancient Ones concept. The album is culled from lengthy recording sessions held in Kuopio, Finland in the winter of 2013 and 2014, and these sessions also produced another album’s worth of excellent material, which will see the light of day on the next release, II, in the spring of 2016. Despite the relaxed nature of the sessions, these are not jam-based improvisational tracks but strong, carefully planned compositions.  The music is laid back and soulful, influenced by classic rock, with powerful female vocals. Listen to the track ‘My Father The Wolf’ here:
What else the future might bring to The Exploding Eyes Orchestra is difficult to foretell, and Corpse likes to consider the band as a loose collective unit which doesn’t necessarily follow the traditional route of rock bands (even though they do play live and release albums) but is not a therapy session either.
facebook.com/pages/The-Exploding-Eyes-Orchestra/1375153479399278
facebook.com/svartrecords
Previous article
Carnalation Pleasures
Next article
Enisferum Track By Track