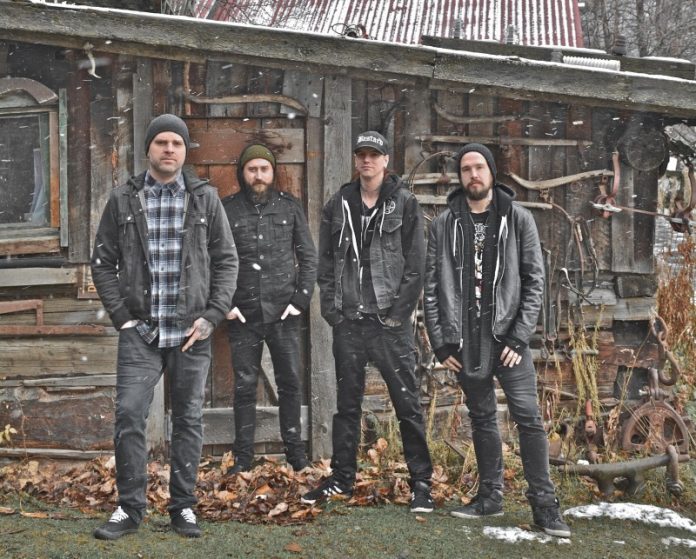 Two part video streams now
Southern-fried metal outfit, ALL HAIL THE YETI release their new album, ‘Screams From A Black Wilderness’ on 13th May in the UK via minusHEAD Records.  The album concept features classic ’round the campfire’ horror stories, presenting a different tale with each track.
The new video for ‘Before The Flames’ begins a two-part story.  The video actually acts as a prequel to the ‘After The Great Fire’ cut from their self-titled debut album, where the story continues.

Both videos were directed by Brian Cox of Flarelight Films and tell the tale of an orphanage of children who are being abused by possessed caretaker nuns.  When the nuns try to hide the abuse, their plan tragically backfires and everyone meets their demise.  ‘Before The Flames’ conceptualizes how the evil corruption came to be, before the tragic flames were started.AHTY vocalist Connor Garritty explains: “This portion of the story is told from one child’s point of view – the little girl writing the letter to her parents begging them to come save her.  The idea for the story was something I came up with and immediately wanted convey visually as well as musically. The director Brian and I worked closely together on the concept and treatment.  From the initial idea I knew I wanted it to be something that would make people feel uncomfortable, but not be too gory.  It’s more of a ‘suggested’ horror, to think of what these nuns are doing to these little children.”

Screams From A Black Wilderness tracklisting:

1. Before The Flames
2. Plague Dance
3. Let The Night Roar
4. Mr. Murder (feat. Brock Lindow of 36 Crazyfists)
5. Lady Of The Night
6. Witch Is Dead
7. Daughter Of The Morning Star
8. Sun Will Never Set
9. Fall Of Core
10. Breaking On The Wheel
11. Nemesis Queen
12. Angels Envy
Pre-orders for ‘Screams From A Black Wilderness’ are available now via Bandcamp –https://ahty.bandcamp.com/album/screams-from-a-black-wilderness and Amazon – https://www.amazon.co.uk/gp/product/B01BL2SGPQ.  If you pre-order the album from iTunes, you can get ‘Before The Flames’ right away:
https://itunes.apple.com/gb/album/screams-from-black-wilderness/id1082521998.

‘Screams From A Black Wilderness’ showcases a heavier, grimier and considerably more advanced version of the ALL HAIL THE YETI fans have come to know since their inception.  Stay tuned for the release of new tracks, music videos and other details coming soon.

For more info on ALL HAIL THE YETI check out the band’s web presence below.