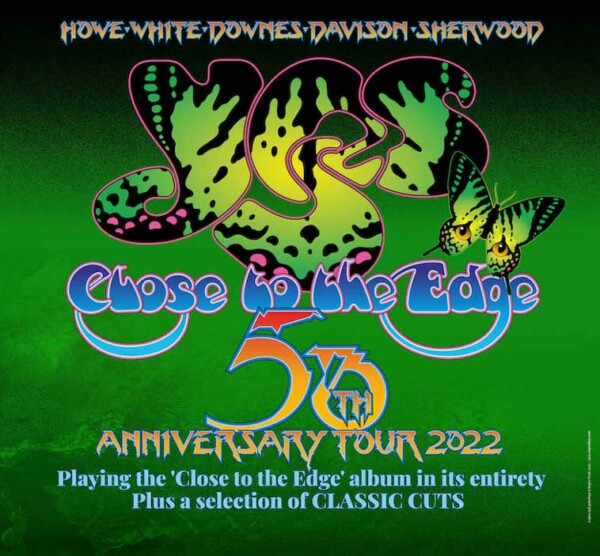 Appropriately for a celebration, there’s a lot of reflection here tonight.

Not least of which is at the start when Roger Dean – himself celebrating 50 years with the band as the illustrator of those incredible record sleeves – talks about his involvement with the group, and of course, given the tragic news just before the tour about drummer Alan White, there’s a poignancy too.

There’s a tribute to Alan in Dean’s words, and on the big screen, as well as Steve Howe leading the crowd in a moment of appreciation. Quite right too, and it must be hard for the band.

The main celebration, though (and how fitting this is) is a celebration of the music that this band has created in the last 54 years.

Their ability to surprise is still there. Opening with the rarely played “On The Silent Wings Of Freedom” from the “Tormato” record almost underlines that. Steve Howe, the sort of de facto leader of the pack these days reckons “it was tough to play, so we dropped it from the set, but this new arrangement brings it back again”. It’s called starting as you mean to go on, I guess. And to think they were doing this at the height of punk is truly sensational.

Split into two halves – and with an absolutely stunning video wall, created by Dean, to go with it – there is so much here to enjoy. “Yours Is No Disgrace”, or “Does It Really Happen” are both technically wonderous, but also warm and welcoming. This is music to lose yourself in.

Howe plays “Clap” – one of the best acoustic solos you’ll ever see – and its tempting to imagine him as some kind of alchemist, creating these sounds in his studio, but its also true to say that Yes is a band, better than most of their peers that are not merely a heritage act.

To that end they are still releasing superb music. In the autumn of last year “The Quest” emerged, and the two from that, “The Ice Bridge” and “Dare To Know” – the latter built around a mighty keyboard riff from Geoffrey Downes to add a real depth – have fitted in so well.

Amongst it all you have Jon Davison (the bands singer for a decade now) and whilst his voice is perfect for this, he adds an air of mysticism somehow, as if he’s just popped in from somewhere else entirely and occasionally transfixed by the images behind. The three part harmonies he does with Howe and bassist Billy Sherwood soar, that’s for sure.

Set one ends with “Heart Of The Sunrise”, and its been a journey – a quest if you will – already, but the second half is the one to get really stuck into.

This show was billed as “Close to The Edge 50 Year Anniversary” and my goodness, hearing them play that album, here is almost transcendent. There’s a standing ovation after each of “Close To The Edge”, “And You And I” and “Siberian Khartru” and well might there be, because this is not your normal band playing normal songs. Look, there’s a reason so many people keep coming back time and time again for over half a century, and it’s in that almost 40 minutes.

The band take their bows after that, but with a simple: “thanks for asking us back” from Howe, they return with an utterly joyous “Roundabout” before flying off with “Starship Trooper”. I can’t help but look at Steve Howe while he plays his solo at the end. He’s jumping around the stage and dancing with all the grace you’d expect from a man in his mid 70s, but its lovely to see. Nothing else shows just how much this music and this band means to people. Even those on stage and there’s a real sense of fun amongst the five of them throughout.

There’s been some chatter about whether Yes is still Yes, with no original members in the band. That’s nonsense and perhaps typical of critics sniping as ever. Yes have just evolved to the point where they are now. And like everything else they have done tonight, they’ve done it perfectly. Glorious, overblown music that simply needs to be heard.

Forever progressing too. That’s Yes. Oh yes. Or something.