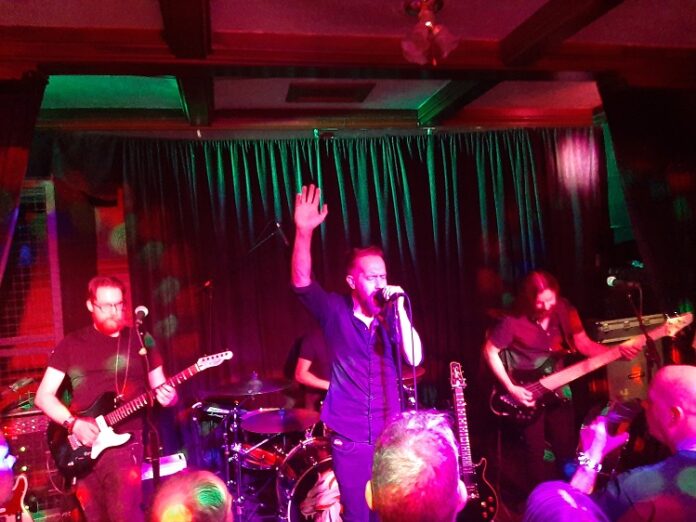 From the days when the Reading Festival was a proper rock festival, through the transformation of Monsters of Rock into Download, the festival scene has been such an important part of enabling bands to reach a wider audience, which is why I’m now standing here watching Empyre headline, when a few short weeks ago I’d never even heard of them. Call Of The Wild (hereafter COTW)! (despite the drizzle during their set) is to blame, and with the demise of Ramblin’ Man it has to be the up and coming festival to see new bands.

I’m not sure how I’ve managed to miss Bastette so many times over the last year or so, but I fortunately also saw them at COTW. As Andy MVM pointed out in a few reviews earlier this year, Caroline is without doubt the focus of attention, but don’t dismiss the rest of the band who deliver a punch and without whom this might collapse like a pack of cards.

Rattling through eight tracks in an all to brief well-honed 35 minute set, Caroline looks the front rows straight in the eye and makes the show feel very personal. Hunter, Talk About It and Sunglass all have power whilst Psycho has menace. They play Good Time Call which is being released next week and all too soon it’s Rollercoaster which draws the set to an end.

So to Empyre and after opening up with Waking Light it shows the confidence a band has in its material that Henrik can announce that they’re going to play a large chunk of the next album and know that it’s not only going to fit in with the existing set but will also be well received. As for saying it’s got an 80’s vibe? I’ll hold judgement until I’ve heard it more.

Stone is magnificent and along with My Bad, Homegrown, Just A Ride and set closer New Republic from the Self Aware album come to life on stage. They’re amongst friends in a hot sweaty pub venue and that’s reflected in their performance.

Can we talk about “The Only Way Out”?

This song freaked me out at COTW and it ticks every cliché about hairs standing up on the back of your neck, The guitar solos are sublime and one of any guitarist would be proud to put their name to. If a radio station (that’s you Planet Rock) got behind this, then goodness knows how far it could go.

The danger with Empyre is that you get immersed in Henrik’s voice and simply forget about Did, Elliott and Grant who are the absolute foundations upon which this band plays on stage. The lyrics are dark, focusing upon real world and personal issues, Henrik really doesn’t sing about sitting on a beach with a pina colada! He jokes that their new hashtag is #KillingTheVibe and if that’s the case the next new song is the funeral. Levity amongst them.

When we saw Empyre at COTW my mate and I had a gentle argument whether they are prog, or rock, or….But you know what? Who cares! Genres have criss-crossed for as long as most of us can recall, ultimately music that you like is good music.

I’d love to predict global domination for Empyre, but unfortunately the world doesn’t seem to work that way these days. But bloody hell these boys are good.

Actually no, both bands are touring extensively; go and see them. You won’t regret it.