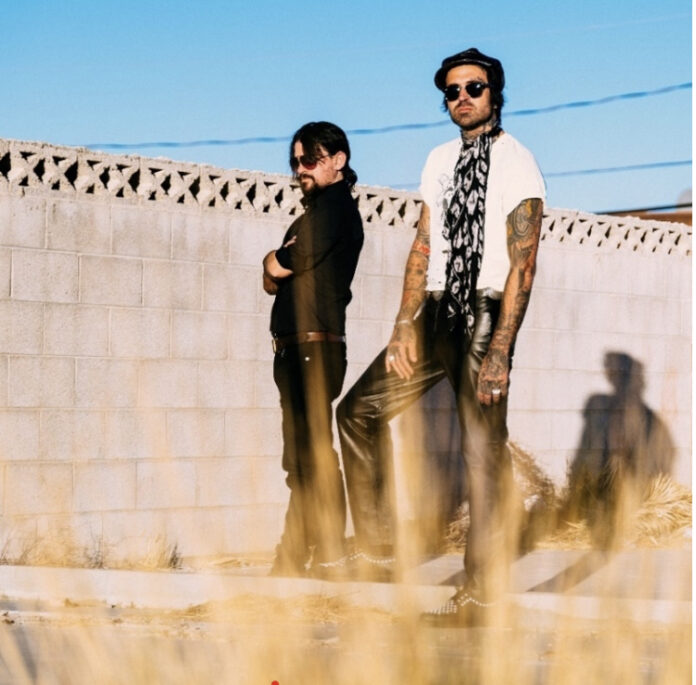 Yelawolf, hailed as “one of hip-hop’s most vital voices” by The Guardian, and Shooter Jennings, one of the Americana world’s most sought-after producers and songwriters, have officially launched their extraordinary new rock project, Sometimes Y, with the release of their infectious debut single “Make Me A Believer,” the lead track off the duo’s self-titled debut studio album, due out Friday, March 11th via Slumerican. On paper, the two stars might not seem like the most obvious combination. But after listening to their collaboration as Sometimes Y, you’ll quickly come to understand that their chemistry, built from a decades-long plus friendship, is in fact as intoxicating as it is unexpected. “Make Me A Believer” channels the nervy charm of Ric Ocasek and the indelible hooks of Rick Nielsen as it reckons with self-worth and the need for external validation – PRESS HERE to download/stream and PRESS HERE to watch the official music video, which first premiered on Billboard.com.

Sometimes Y is available to pre-order now at all DSPs; each digital pre-save will include an instant download of “Make Me A Believer”– PRESS HERE. The album will also be available physically on CD and vinyl; pre-order coming soon.

“When you’re a kid in school, they teach you all these rules about spelling,” Jennings explains, “but then they tell you about ‘sometimes y,’ which calls the entire system into question. Suddenly everything’s out the window and you can do whatever you want. That’s what it felt like making this record.”

“Shooter and I have been planning on working together for years and when we finally buckled down and made the album, I was like,’What the fuck were we waiting on?!,” adds Yelawolf. “Sometimes Y is the name of the group because of the question we bring to music and the listener. It also gives us the freedom to do anythingand make any style we choose.”

Sometimes Y, produced by two-time GRAMMY Award winnerJennings, is a bold and intoxicating rock and roll hybrid, one that fuses past and future sounds to conjure up some alternate universe where David Bowie fronted Thin Lizzy or Axl Rose sang with The Cars. The songs on the forthcoming album are as addictive as they are unpredictable, mixing ’80s bombast and arena rock energy with country earnestness and hip-hop swagger, and the performances are thrilling to match, fueled by the pair’s undeniable chemistry and irrepressible joy. Jennings’ production work is lush but never crowded, and Yelawolf’s lyrics are utterly arresting, grappling insightfully with purpose and perseverance, struggle and triumph, pain and transcendence.

The 10 tracks on the album were recorded at the famed Sunset Sound Studios in Los Angeles in June 2020, amidst the COVID-19 pandemic and the heart of a tumultuous summer marked by social and political upheaval. With Yelawolf as the invigorating front man,Jennings, who appears on synthesizer, piano, and acoustic guitar,enlisted his longtime bandmates – Jamie Douglass (drums), Ted Russell Kamp (bass, banjo, acoustic guitar), and John Schreffler(guitars, pedal steel) – to complete the project, which was mixed by GRAMMY-winning engineer David Spreng (Smashing Pumpkins, Bob Dylan) and mastered by GRAMMY-nominated engineer Pete Lyman (Chris Stapleton, Weezer).

“The first time Yelawolf and I connected on a track, it was like this fire exploded in my mind,” says Jennings. “It confirmed my long-held suspicion that there was something really special between the two of us. Also, I’m not sure everybody knows how good of a singer this guy is, but he’s one of the best I’ve ever worked with. His instincts for melody, phrasing and timing are just so fresh and exciting.”

“I don’t think either one of us knew what would happen in the studio, but once we found the mojo, it was the most electric vibe I’ve ever experienced making music,” shares Yelawolf. “This album is a fresh sound from a group of guys that are clearly hungry and enjoy what we do. And what is rock and roll anyway if it ain’tlawless?! Personally, I’m ready to shake shit up and have fun!”

Weighty as the record can feel at times, it’s ultimately a work of liberation and release, an ecstatic declaration of creative freedom fueled by adventure, discovery, and a little bit of chaos, which is precisely what Sometimes Y is all about. Stay tuned to hear more!