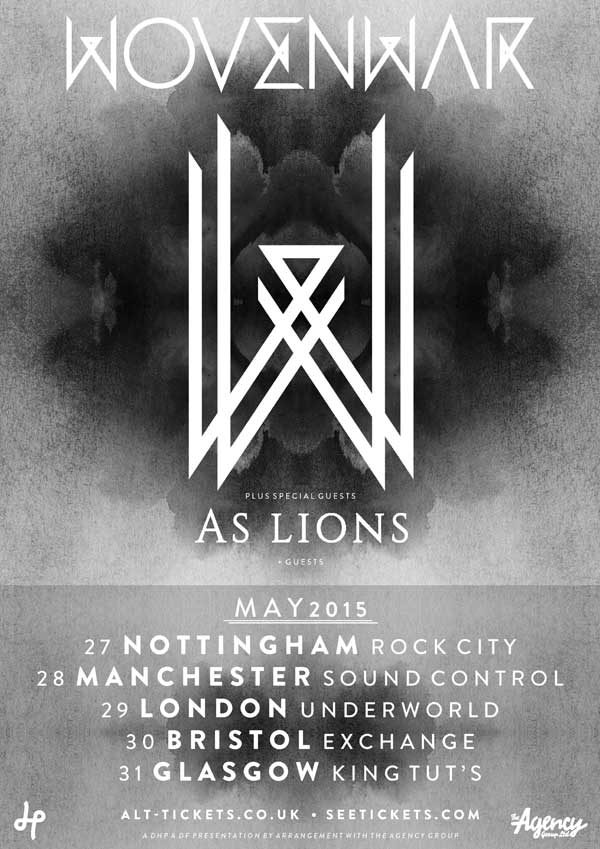 In the UK on their own or Europe with Sylosis, sounds cool to us

WOVENWAR are excited to return to the UK in May for a a run of headline dates supported by As Lions followed by a club tour on the continent as direct support to SYLOSIS!

Comments the band: “If we lads in Wovenwar had a pence for every great show memory experienced in the Europe, our trousers’d be loaded with one or two quid… each.  Off our trolley’s in enthused anticipation of our upcoming tour, we look forward to performing many more wonderful moments with you lot. Cheers!“

The band kicked off 2015 on a massive North American tour alongside Periphery and Nothing More to nothing but rave reviews.

WOVENWAR‘s self-titled debut was released in August of 2014 and landed at #36 on the Billboard Top 200 charts. On iTunes, the album peaked at #2 on the rock charts, and #1 on the metal charts during its week of release. In Germany the album landed on position 41 in the official Media Control Charts.

Revolver Magazine heralded the album as “more multifaceted than anything by As I Lay Dying,” and Decibel Magazine added that “WOVENWAR sounds confident, vital, and even liberated on this splendid debut.”