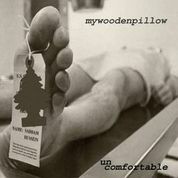 Manchester band release an EP which hints at greatness to come.

There is a moment on “Call For War” – the second cut on this four tracker from a band named after a device to cure neck pain  – when it seems that everything up to and including the proverbial kitchen sink has been chucked into its glorious five minutes.

Starting with an opening that echoes Skindred, there’s been hardcore, thrash, growling male vocals, before there’s a clean female line added by Michelle Adamson. It shouldn’t work. It should be an almighty hotch-potch of a mess, that it works so fantastically well and is such a stand out song is really all you need to know about MWP.

Everything else – and an explanation as to why “Call For War” is the way it is is contained in this paragraph taken from the bands own Facebook page: “We denied to be pigeonholed in a certain musical genre or style for the sake of it, and we never will, the say. “We admit that our sound is heavy but that’s it, the rest is all rock roll to us.”

The most recent result of that refreshingly eclectic approach is this, the “Uncomfortable EP” which features three more songs of a similar ilk. “The Line” begins a thrash riff which almost bursting to leap out of the speakers, while “Decaptialist” adds a bigger groove and a huge bridge.  The closing “MWP” is different again and becomes a veritable clenched fist and two fingers to the wider world as it’s defiance proves that the band it’s named after is not going anywhere.

A frequently thrilling hint that something very special could emerge from My Wooden Pillow in the near future. A new album is being recorded with renowned Producer Chris Fielding at Skyhammer studios and is set to emerge early next year. It could – if “Uncomfortable” is any guide, be worth waiting for.