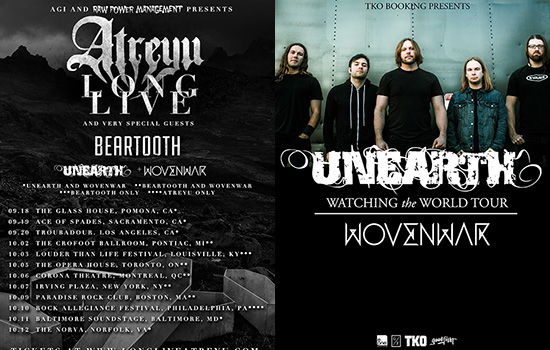 Wovenwar will be back on the road in September with Atreyu. The tour also features support from Unearth and Beartooth. If that wasn’t enough, Wovenwar have confirmed that they will join Unearth for a batch of shows in September and October! Additionally, Wovenwar has been tapped to support Sevendust for three shows in the midwest October 21-23rd. See the complete list of dates below, and follow the band online for updates at facebook.com/wovenwar.

In other news, Wovenwar‘s self-titled debut album has been nominated for two San Diego Music Awards, including Best Hard Rock band, and Best Hard Rock album. Fans are invited to vote for the Best Hard Rock category, and have until 5:00pm on September 18th to do so HERE.

Recently, Wovenwar launched a video for “Archers,” which was shot a their hometown San Diego venue, Brick By Brick, on July 10th. It was an intimate show, full of the band’s friends and family. “Archers” is streaming today now on YouTube HERE. The video was shot by Josh Knoff and directed/edited by Nick Hipa.