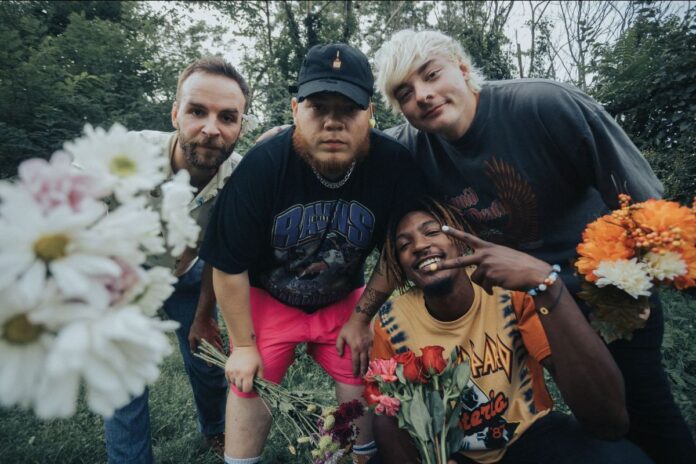 Baltimore-based nu-punk quartet Cherie Amour have released their debut album Spiritual Ascension, out now via Rude Records / Equal Vision Records. The release is accompanied by an official music video for ‘God Be A Woman’.

Watch the video for ‘God Be A Woman’ here: https://youtu.be/G4V9XSqL6h0

Cherie Amour has built hype throughout the year with a series of singles that have garnered them acclaim from fans and critics alike. ‘Losing Control‘, ‘Sin City‘, ‘Letting Go‘, and ‘Love’s Not Your Thing‘ gave fans a taste of the creative diversity that shines brightly on their debut full-length, paired with official music videos that introduced the distinct personality and style of the group.

Spiritual Ascension is a creative tour de force that effortlessly explores the sonic landscape of punk rock, pop-punk, electronic-tinged pop and hip-hop. All 11 songs are absolutely dripping with attitude, and each serves as a statement on the band’s versatile songwriting ability. The album boasts a colossal amount of production value, courtesy of longtime producer Alan Day (Four Year Strong). Spiritual Ascension takes listeners on a rollercoaster ride punctuated by pulsating, club-friendly grooves, moments of metallic fury, stage-dive anthems and a heartfelt lyrical sensibility throughout. The band have a fearless creativity they aren’t afraid to flex –  Spiritual Ascension is proof that Cherie Amour are amongst the bright rising stars in alternative music.

“Spiritual Ascension feels like it picks up where [previous release] Internal Discussions left off. Since the release of our first EP we’ve all gone through huge life changes not only musically, but in our personal lives too. We’ve grown a lot as people and as musicians and we really felt that while writing this record. We dive deeper into our heavier side as well as our RnB and hip-hop side. When you listen to this record we hope it brings you peace of mind that we’re all trying to find our place in this world, and no matter what you’re going through you will always have the people around you.”