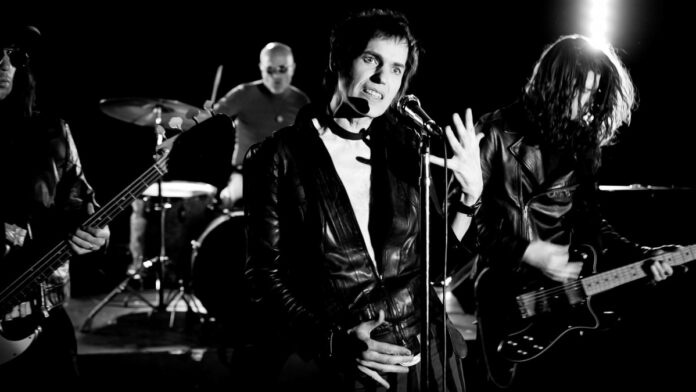 ‘Le Fondu Des Bas-Fonds D’Écran’ (Fading Into The Shallow Screen) is a new single from ‘L’Homme De L’Ombre’ (Man Of The Shadows), the debut solo album by London based French musician and producer Marc O. Released in March 2022 and sung entirely in his mother tongue, the album was well received throughout the UK rock and pop press.

The lyric for the song is an allusion to Wikileaks founder Julian Assange and in part argues that, if we are living in an era where we advocate transparency, then it must be absolute. In other words, either everything should be disclosed, or nothing. It is just one tale from the overall album concept, which sees Marc’s rock sensibility combined with the wise yet witty writing of his brother, the author and philosopher Bruno Pons Levy. Giving each other freedom from interference in their areas of expertise, the result is not so much a songwriting duo but rather a powerful third creation.

‘L’Homme De L’Ombre’ has a back story that reflects Marc’s dedication to his art and was only completed after lifesaving cancer surgery midway through its recording. Following a long road to recovery, plus a re-awakening of confidence to finish a record that had now acquired a new depth of meaning, he returned to the studio in 2021 to complete a record that he had started in 2016. “It was a long time in the making and it still feels that this record has already had many lives,” he ponders.

In combining the attitude and bravado of Iggy Pop, the sensuality and sophistication of Serge Gainsbourg and the penchant of artists such as Lou Reed and Jarvis Cocker for avant-garde and culturally challenging work within the rock/pop realm, Marc O overcame adversity to create a body of work that incorporates an underlying sense of surrealist beauty into its dramatic, visceral fusion of rock and French music.

Blurring between the real and virtual worlds, the subconscious, gender dynamics, inequality and the abuse of power, the nature of paradox, the ambivalence of human nature, nationalism and multiculturalism, ‘L’Homme De L’Ombre’ is packed with memorable songs peopled with figures such as Hermann Rorschach, Erwin Schrödinger, Raymond Aron and Julian Assange.

It begins with ‘L’Homme Du Monde’ (Man Of The World), which comments on globalised economic systems, while the closing title song is a dark and epic tale of narcissism and the notion of the death of the author. In between, listeners may learn something new about the world, human nature and perhaps even themselves, but are guaranteed to be delighted by the musician and writer who created this most personal of journeys.