Witchsorrow Are On Fire 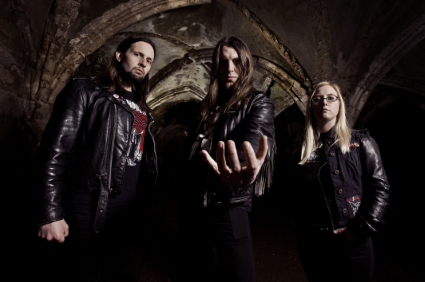 July 2, 2015
Reading time: 1 min.
Facebook
Twitter
Pinterest
WhatsApp
Linkedin
Email
Print
Telegram
Copy URL
By Andy Thorley
New album announced from Hampshire Doom Lords
Three years on from the lead-weight doom of 2012’s apocalyptic God Curse Us, Hampshire doom militia Witchsorrow return with the aftermath: No Light, Only Fire.
Recorded once again with Skyhammer Studios producer Chris Fielding (Electric Wizard, Primordial, Winterfylleth, Serpent Venom), the eight tracks of bone-shaking doom that make up the album pick up where its predecessor left off. But where that album called for Armageddon, No Light… is the grisly horror of survival.
“On our last album, I was hoping for a catastrophe, for something enormous to come and end everything. But there was no final ending, we’re left just picking through the ashes,” explains frontman Necroskull. “The people from God Curse Us have got worse, everything’s become more weakening, but I’ve stopped hoping for everything to end. I can’t even hope for that anymore!”
As ever, Witchsorrow’s trademark mix of Sabbath-worshipping true doom, heavy metal thunder and misanthropy rings throughout the whole album like a funeral bell.

Comparison’s to Saint Vitus, Electric Wizard, Reverend Bizarre and Trouble are all valid, and indeed welcomed by these doom fanatics. So, come now, peer into the abyss, and find that there’s No Light, Only Fire…

Previous article
Emma’s Song
Next article
REVIEW: BETWEEN THE BURIED AND ME – Coma Ecliptic (2015)