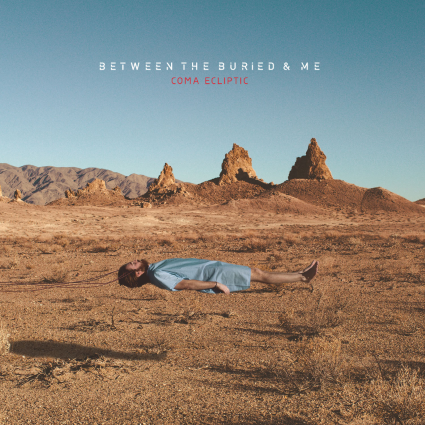 
Over the years Between The Buried And Me have matured into a very special band indeed. Loosely a prog metal band, they attempt their dazzling interpretation of music in a startlingly original way.

So it is here on their incredibly bombastic new record “Coma Ecliptic.” In fact, so weighty is this tome – and it’s not just the fact that it clocks in at well over seventy minutes either – that you will do well to understand its majesty when you first hear it.

And yet, it starts conventionally enough. Which may or not be a problem to the “old school” fanbase. The band were always forward thinking, but this a very different beast to that which appears appears on their first few records. For a start, nearly all the lead vocals here are clean, and it’s clear that BTBAM have moved on – not like Opeth, as what Tommy Rogers’ men do very much feels like a natural progression, but it’s a journey all the same.

“Node” is very much the calm before the considerable storm. Three and half minutes of lovely, lilting piano, is in stark contrast with how this album builds and builds. It wouldn’t be out of place on a Steven Wilson record. “The Coma Machine” flexes rather Dream Theater type muscles, while “Dim Ignition” – at just two minutes, is a really interesting track. Starkly industrial in feel, it acts as the builds as the perfect companion to “Famine Wolf,” which is an unbelievably complex work. A sonic maelstrom just keeps coming at you, in a quite disorienting way. It’s results are wonderful.

Perhaps eager that this record – and their sound – can’t be pinned down, “King Redeem, Queen Serene” initially has a look round in the quiet to see what it can find, with some fine use of harmony vocals, as you guess the “feel” of this record was just as important to the band as anything else, while “Turn On The Darkness” is a veritable exploration of just what they can achieve as musicians.

Actually “….Ecliptic” appears to be the kind of record where the band set out to try as many things as possible just to see how it sounded. On work such as the superb “The Ectopic Stroll” it seems like a plan well with it. Oddly funky, it is somewhere between Stevie Wonder’s “Superstitious” and a mash up between Yes, Megadeth and The Beatles. Categorically it shouldn’t work. Categorically it does.

It continues in that vein. Almost as if the band have decided that if less is more, more can even more still. “Rapid Calm” is anything but, almost hypnotic in its pulsing urgency, and “Memory Palace” is the standout track here. Kicking off with a piercing riff, and moving off all over the place, in what can be likened to an extended jam that ends up with a tremendous coherency.

If you think if this record as a journey – and in many ways that’s what it is – then it calms down as it approaches home. “Option Oblivion” is a lush almost ballad like track, and “Life In Velvet” almost brings us round full circle to the piano led work that played us in.

“Coma Ecliptic” is the type of record that reveals more of itself to you each time. Just like Between The Buried And Me wanted to explore then so the listener must be ready to be taken to places too. Give it the time and it’s a magnificent piece of work.