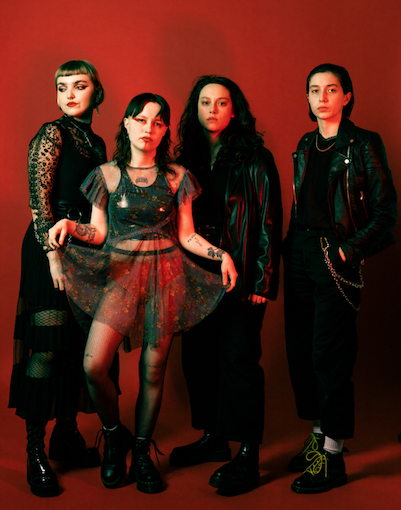 On the performance, drummer Annabelle says, “We are so EXCITED to announce our first London headline in a fucken while. We’ve curated a sick line up which we will tell you about soon.  We’re buzzing to finally be playing with these bands!  Expect a hot n heavy show brought to you by some of the most powerful musicians in the game.”

With supports yet to be announced, Witch Fever will be curating the evening so expect some very special guests to make an appearance.

Since signing to Sony’s Music For Nations last year, the four-piece have played an in-store at Rough Trade East, a sold-out tour with political duo Bob Vylan, been backed by Frank Carter, performed at Brixton’s O2 Academy supporting IDLES, and are about to set off on selected EU dates with them and Bambara.

Debut EP Reincarnate was released at the tail end of 2021, and included singles ‘In The Resurrect’ (watch here), ‘In Birth’ (watch here), title track ‘Reincarnate’ (watch here), and ‘Bully Boy’ (watch here) – Now in 2022, Witch Fever are already well on their way to new heights, and are ready execute the year ahead.