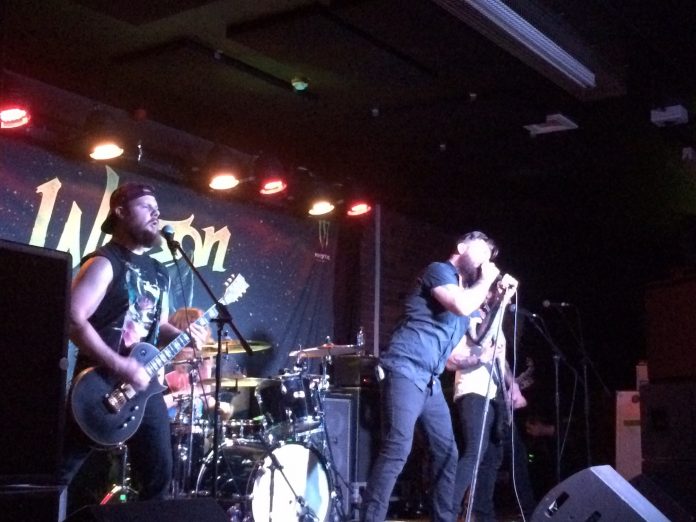 Southfall, as luck would have it, have an EP out today. And then there’s this to celebrate. As singer Matt puts it “when I got the email it was like ‘hell yeah I’ll support Wilson'”. Such a shot is well merited for a band with plenty of experience on the local scene. They only got together last year but there’s already a feeling that they’ve moved beyond having potential and into being rather good. Chunky, meaty riffs and vocals that veer skilfully from melody to scream at a moments notice augment an entertaining set that contains all of that EP – appropriately titled “Awakening” – with the title track kicking off and “C4” ending with a bang (sorry!). In between they play a pair of songs in “Glory” and the change of pace “Exile” that give notice that Southfall are band with plenty of ideas and who are heading in the right direction.

Birmingham based trio Crimson Star claim Michael Bolton as an influence. Disappointingly a cover of “How Can We Be Lovers” never appears. In its place though is a confident mix of riffery and angular songwriting. Somewhere in between Therapy? And Nirvana, songs like “Waste Away” and the even better “Hide Inside” are too good to ignore. Singer James Shaw roars formidably and with his fine guitar work backed up superbly by rhythm section Roj on bass and Ross’ pounding drums, this is an incendiary outing. There’s an urgency about the pulsing “Driven” which ends this that demands attention. Crimson Star, who like the first band, have just released an EP, certainly shine here.

Another three piece, West Country mob Reigning Days, have become a hip name to drop in recent months given their patronage by Kerrang Radio and almost constant touring. They’ve just finished with Raven Eye and have barely had time to unpack before this tour kicked off. The result is a band that is a little more polished and road tested than you might expect for one with just a couple of singles. One of these,”Friendly Fire”, rocks and rolls its way into your conscience, “The Boy Who Cried Wolf” has a darker, more insistent presence and closing tune – and current single – “Renegade” builds to quite a crescendo. Expect to see a lot more of Reigning Days throughout 2016.

It’s highly doubtful that when Detroit “Party Metal” boys Wilson planned their first night of their first headlining tour of the the UK that they dreamed that the microphone would cut out in the first song. But this is live music, people, and this happens. It’s how you overcome it that counts, and boy, Wilson don’t just come overcome it, they smash it to pieces.

It’s rather like this. There’s bands that shuffle meekly onto the the stage and kind of hope you might like them, then there’s bands who are too cool for all that and don’t care whether you like them or not. Then there’s bands like Wilson, who are seemingly on a mission to make everyone in the room love them – and you might as well submit now because you will do anyway sooner or later.

Much of this is down to singer Chad Nicefield, he’s clearly thrilled to either be here, or just be on stage at all and he’s quite superb at it. There’s just a hint of something dangerous about him when he tosses out the lyrics to current single “Give ‘Em Hell” but he’s a fine rock singer and and energetic performer.

What Wilson deal in is testosterone filled, turbo charged rock. “Windows Down” isn’t about asking permission to have a good time, it’s about having one and having one now – and frankly what did you expect from a band who’s debut album is called “Full Blast Fuckery”?

Even the moments that might have been tender are anything but. “Shall we sing a song about making love?” Asks Chad. What follows is “The Flood” which positively drips with filthy intentions.

Jason Spencer (he’s “the man with the biggest cock in rock n roll” suggests the frontman) casually fires riff after riff and by the time Nicefield has dived in the crowd for crowd surf in the Every Time I Die-esque conclusion “Sarah Jane” the faithful have submitted.

Every journey to an arena has to start somewhere, and who knows if in years to come 10,000 people will be in an enormodome all claiming they were here at the very start. A few were, and they know that if passion and drive counted for anything then Wilson would already be huge.