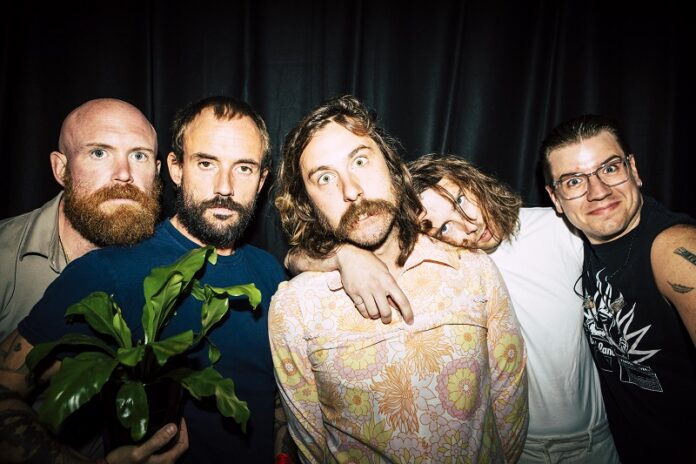 In October, IDLES – Joe Talbot, Mark Bowen, Lee Kiernan, Adam Devonshire and Jon Beavis – announced details of a brand new reissue of their seminal debut album Brutalism. Set for release on Friday 9th December via Partisan, Five Years of Brutalism will be re-issued on limited cherry-red vinyl with alternative artwork. The digital package will feature the entire set from their surprise performance from the BBC Introducing Stage at this year’s Glastonbury.

Today they share the audio from one of the stand out tracks of that secret morning set and the song that closed the show – fan favourite ‘White Privilege’. An already electrifying track taken to a new level of intensity from a band giving the assembled crowd their every last drop of energy. Speaking about the significance of the track, Talbot writes:

“White privilege was the first time I became mindful of my abusive and entitled behaviour. I thought I’d dance with it and stop it. I did.”

To further celebrate the release of the Five Years of Brutalism the band will be taking part in a Youtube Listening Party on release day at 19:00 GMT, giving fans the opportunity to listen and chat alongside members of the band whilst they communally listen to the original album. The event will begin with the broadcast of a brand new video for album track ‘1049 Gotho’ directed by frontman Joe Talbot. Speaking further about the video he writes:

“The 1049 Gotho video is a pastiche of some old cliched ideas I had when we started the band and I wanted to honour that and also nod to the references of Crawler which were a reflection on the Brutalist period. It’s a time capsule of ego and gratitude.”

Join the Party at 19:00 on Friday 9th December here: https://youtu.be/IpvpJnR1MJk

Brutalism was originally self-released in March 2017, surpassing expectations to become one of the decade’s most important debut albums. Beneath the surface of its aggressive, foreboding music and lyrics lies a level of confessional vulnerability and honesty that comfortably cemented it as an instant classic.

Having previously released two cult EPS, 2012’s Welcome and 2015’s Meat, it was Brutalism that catapulted IDLES into the spotlight. Showcasing the band’s ability to summarise societal discourse with pin-point accuracy, one of the album’s central themes was to highlight the role of women in singer Joe Talbot’s life. Having lost his mother during the recording of the record following a long illness, it journals his experiences with grief and eventual rebuilding. The original album artwork features a photograph of his mother alongside a sculpture created by Talbot and his father. A limited edition of 100 LPs were released in October 2017 with Talbot’s mother’s ashes pressed into the vinyl. Speaking further about the album, Talbot writes;

“What started as a headstone slab of indulgence and unrest became a long journey of beauty, forgiveness, and gratitude. Little did we know that it was not just a headstone but the foundations we were building, for a house full to the brim with loving human beings. Thank you so so much”

In the 5 years since Brutalim’s release IDLES have gone on to achieve so much, including a number one album, sold out tours and festival headline appearances around the world. Its follow-up, Joy as an Act of Resistance, further springboarded the band into the UK (and beyond)’s consciousness and paved the way for the colossal ‘Ultra Mono‘ – the band’s first UK No. 1 album. Last year’s CRAWLER contained the buzz-saw urgency that their now global fanbase had come to expect, but expanded its sound with more melodic and introspective songs. At every step of the way the band have garnered a wealth of dedicated supporters – from the early breaks given to them by Steve Lamacq and BBC 6 Music, the independent live music circuit and the rabid AF Gang community – the latter of whom produced a feature film entitled “Don’t Go Gentle: A Film About IDLES” released globally and screened at many international film festivals.

Previous article
GET INI
Next article
HIT A DJERV