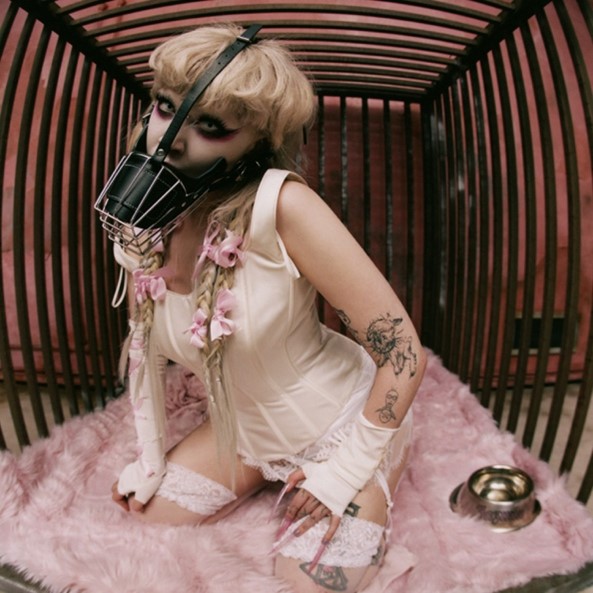 Island Records/Interscope recording artist, and one of the UK’s most talked about visual creatives, Jazmin Bean, is set to lift the lid on a world you never knew existed with the release of their new single ‘Puppy Pound’ on March 25th.

Puppy Pound unleashes Jazmin’s sarcastic, tongue-in-cheek side leaving no holds barred. Made with Jonny Coffer (who’s worked with everyone from Fall Out Boy to Beyoncé) the song sees Jazmin sing “I don’t need a fucking leash, not scared to use my teeth” over deeply abrasive synthwork. Jazmin adds “Puppy Pound is about when you’re feeling your best you think you’re coming into yourself and then that one person comes and knocks you down with everything you do, it was kind of a really light-hearted way to talk about something hard for me”.

Following on from their critically-acclaimed Worldwide Torture EP that has clocked up over 100 million streams and a storming set at last year’s Reading & Leeds festival, Jazmin has spent the last few months in LA writing and recording and is poised now to release this new single and further music throughout the summer.

Jazmin is a multidisciplinary artist, specialising in music and film, who has spent much of their life in London. But they are tenuously tied to everywhere, creating and collaborating with artists across the world thanks to a life spent online. Having already amassed over 80 million YouTube views and nearly a million Instagram followers and Spotify listeners – they are the sound and spirit of Generation Z’s genderless subculture – unapologetically impossible to define.

Jazmin’s otherworldly visuals are a melting-pot of inspiration, leaving you as intrigued as you are uncomfortable when drawing back the curtain. If we have grown accustomed to care-free euphoria pop becoming commonplace in the charts, then prepare for everything to be shaken up. Jazmin is here, and they are about to fuck with everything we are familiar with.