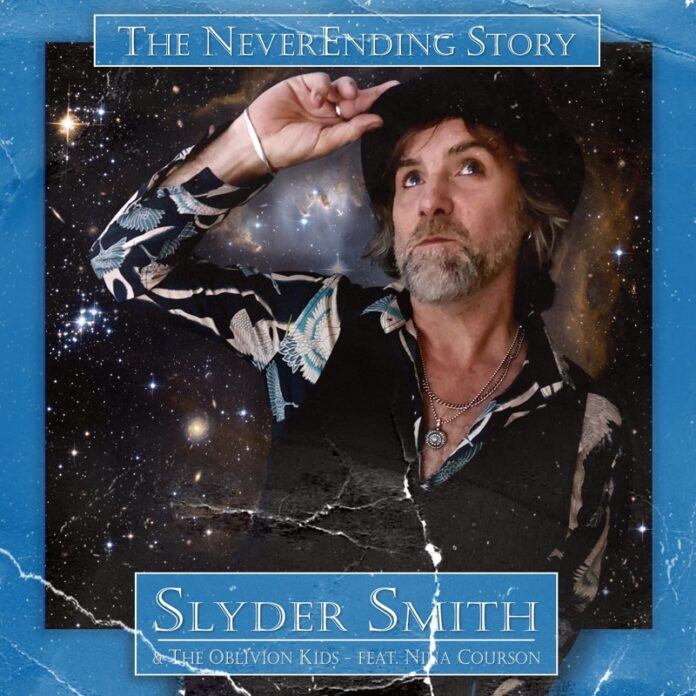 Ahead of a run of UK live shows this December, Slyder Smith & The Oblivion Kids have released a heart pounding cover version of the iconic 80s hit, ‘The NeverEnding Story’.

The song is accompanied by a new music video, with band performance filmed by Wills Audio at the famous Buckley Tivoli theatre and transformed into a fun concept video with additional footage & editing by producer Darren Stockford paying homage to the bombastic 80’s era.

Without a shred of tiresome irony, Slyder Smith and the Oblivion Kids boldly reimagine Giorgio Morodor’s 80s cult classic. Whilst staying true to the original, the power trio bring a dynamic commercial rock feel to Limahls’s electronic pop hit with guest vocals from Nina Courson of Healthy Junkies. With their debut album, ‘Charm Offensive’, released to critical acclaim from press, media and music fans alike earlier this year, ‘The NeverEnding Story’ is another thrilling chapter for Slyder Smith & The Oblivion Kids.

The band will be spreading their grit, glamour, emotion and possibly some glitter across venues across the UK throughout December:

To celebrate the release of their new single ‘The NeverEnding Story’, Slyder and his band of merry men role into town with a cast of London Royalty.
Tickets are on sale NOW: https://www.wegottickets.com/event/554172

Opening the show will be Soho Dukes – delightfully eccentric punks bringing a colourful bravado to the stage! Next to tread the boards will be the glamourous rebel punkster, Nina Courson and her band, Healthy Junkies – serving up a mix of Punk, Grunge, Psychedelic, New Wave & Glam Rock, with a soupçon of theatre.

The stage is now set for our headliners, Slyder Smith and the Oblivion Kids – The power trio have been perfecting their live performance over the past few months with a range of headline shows and as special guests to the Electric Boys and are now ready to take the capital by storm, delivering lashings of grit, glamour and emotion! Expect a night full of audience participation, shameless party antics and general festive debauchery! What could possibly go wrong?

Slyder Smith & The Oblivion Kids are:

Previous article
HU’S GOT THE PEACE AWARD
Next article
DO IT, SOPHIE