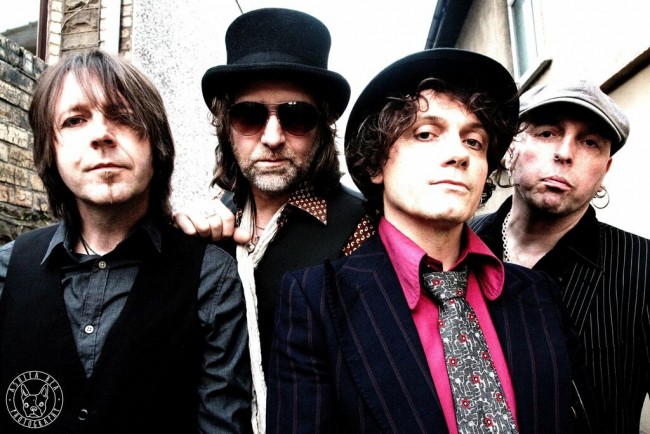 Brit rock dandies, boasting an irresistible blend of hard-edged power pop hooks and shimmering glam style, The Last Great Dreamers lit up the live circuit of the mid-90s, even claiming Kerrang!’s ‘Best New Band’ title, before disillusionment and tragedy cut their dreams short.  After nearly numbering amongst rock ‘n’ roll’s great lost hopes, they staged a fabulous resurrection in 2014, putting on a comeback show that had Classic Rock’s Richard Thompson proclaiming “it’s entertaining, spirited and infectious… The Last Great Dreamers have all the ingredients to be popular again”.

The band now continue their resurgence, with the announcement of a November UK tour with Cherie Currie.  The 8 date run will be the Runaways singer’s first trip to the UK in 35 years and, with the addition of Last Great Dreamers’ tight, sharply-tailored and hard-rocking presence to bill, it’s set to be an unmissable show.  Dates are; –

To coincide with the tour, Last Great Dreamers release new single ‘Dope School’ on November 9th, as a CD and download.  Backed with a second brand new track, ‘White Light, Black Heart’, (only available on the CD), it follows last year’s well-received 11-track rarities release ‘Crash Landing In Teenage Heaven’, which triggered a surge of renewed creative energy.  Guitarist Slyder says, “it was very important for us to have new material to show that we weren’t just on a nostalgia trip, as until now we have been playing stuff we wrote and recorded in the 90s… we started arranging and working on these songs in the rehearsal studio and the process was so exciting, we really can’t wait to play these songs live”.

The new tracks hear Slyder, Marc Valentine (vocals/guitar), Ian Scruffykid (bass), and Denley Slade (drums) serve up two fresh slabs of glorious grit ‘n’ glitter caked power-pop, rich in infectious hooks and crammed with swaggering six-string melodies.  Slyder continues, “they are easily recognisable as Dreamers songs, but we think they are quite different from any of our previous stuff.  We have already tried out ‘Dope School’ live at a festival in August and it went down a storm!”.

Writing will soon be underway for a full album, with the band planning to complete recordings with the help of a Pledge campaign in the spring, a perfectly fitting approach given the role people power and fans’ enduring passion has played in bringing them back.  At the peak of their promise, Last Great Dreamers were boasting that Kerrang! accolade off the back of 1994’s debut album, ‘Retrosexual’, and were regularly filling London’s legendary Marquee between tours with high-profile US acts.  However, the last minute collapse of a major record deal, and a string of tragedies in their touring family, led the group to disband in 1997 and scatter across the globe.

That might have been the end of the story until, in 2011, Slyder stumbled upon an online community of fans reminiscing about the band.  As he came to recognise what Last Great Dreamers had achieved, and what untapped potential they still possessed, Slyder found himself being reunited with his bandmates, via a series of strange coincidences and fan connections.  By early 2014, he and Marc were laying plans for ‘Crash Landing In Teenage Heaven’, and original drummer Steve Grainger and bassist Paul Harrison had given their blessing to the pair taking the show on the road, with a new rhythm section.

A few short months later and Last Great Dreamers have undergone a triumphant resurrection, vindicating fans who’ve kept the faith throughout, and now delivering the musical goods to predict a bright future ahead, and recruit a new generation to their cause.