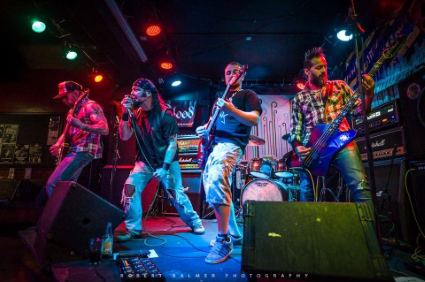 Formed from the ashes of previous bands and finalising the line up in September 2013, Doomsday Outlaw bring a huge, down & dirty slab of Southern rock and metal in the form of their debut album, eleven tracks of heavy groove-laden rock swinging from Danzig to Black Label Society via old-school Pantera. Play LOUD!

The band have gained a large fan base from their blistering live shows and are now starting to build further on that with this debut album release, two singles and videos are to follow.

Garnering success at the heat stage of Metal 2 The Masses (East Midlands), Doomsday Outlaw are now battling for a slot at Bloodstock Open Air Festival, playing the semi finals on June 20th at the Intake Club, Mansfield. They’ll be a fabulous addition to BOA this summer so go along and check them out!

Black River was recorded and mixed at Snug Recording in Derby during October 2014 by Richard Collins, mastered at Subsequent Studios in Nottingham.

‘Black River’ is available to buy from the Doomsday Outlaw website