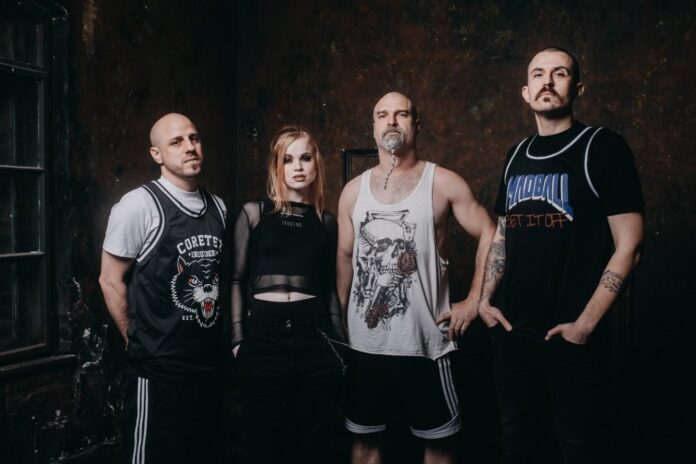 With almost a decade of existence, THE HELLFREAKS embrace the influence of modern metal, alternative, post-hardcore and punk to form their unmatched sound. Performing in almost every European country and gaining more awareness via their American tour in 2015, the well-experienced band from Budapest proves with their fifth album, Pitch Black Sunset, that they are more than ready to kickstart their next chapter!

Kicking off with vocalist Shakey Sue’s trademark sing-along-screams, “Old Tomorrows” raises the pulse with fast-paced punk mixed with groovy metal beats. Followed by the restless track “Chaos”, boisterous thrash lines meet pop-punk-infused metal before closing with a Tom Morello-worthy solo. THE HELLFREAKS stay true to themselves yet never become stagnant or pretentious – as tracks like “Weeping Willow” are driven by more modern metal interpretations and electronic interludes. With its fragile clean vocals and the eerie sounds of the guitar’s strings, the atmosphere of the song changes throughout before taking an unexpected turn into a hard-hitting core-hymn. “Body Bag” offers a total contrast – surfacing like a message in a bottle with its in-your-face, straight forward 2000s skate punk vibe that fans of the genre have always wished for. THE HELLFREAKS showcase the individual musical expertise of its members when chunky riffs merge with strong beats and highly aggressive shouts, while bittersweet vocal lines call out for a feelgood song.

THE HELLFREAKS state on Pitch Black Sunset:
„Since our last album, our world around us has turned much darker than what we ever expected. Covid, war, inflation. Enough reasons for introspection to find out if there is any light left in us. An excursion between the best and worst parts in us.

Pitch Black Sunset is about how these contraries interfere with each other: the past and the future, peace and chaos, eastern and western, life and death. This album invites you to a car ride straight into the canyon between these opposites. Does it end in a car crash? Sometimes. But we found beauty in it.”