Unleashing their third full length ‘Chasing The Devil’ this past June, thrashers TITANS EVE announce they will be performing a show  in Vancouver, BC on August 14th at the Astoria with support from Revenger, Winnipeg’s Tyrants Demise, Medicine Hat’s Morbidly Depraved and Meridius. For full show details, please visit here.

‘Chasing The Devil’ is streaming at the following links and can be purchased digitally and on CD at iTunes, Bandcamp, Amazon and CD Baby.

Engineered by Eric Mosher (AC/DC, Buckcherry) plus mastered by Jeff Waters of Annihilator, ‘Chasing The Devil’ features seven stadium-esque sing along thrash anthems including fan faves ‘War Path’ and ‘The Grind’ plus the band’s epic instrumental ‘Stranded’. The album is the follow up to the band’s previous releases 2011’s ‘The Divine Equal’ and 2012’s ‘Life Apocalypse’ that took the band touring across North America and Europe where they shared the stage with Korn, Anvil, Kill Devil Hill, Arch Enemy and Voivod among many others. 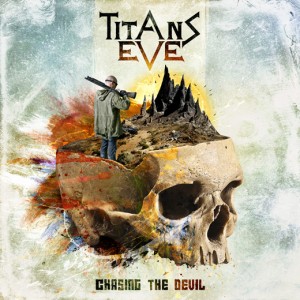