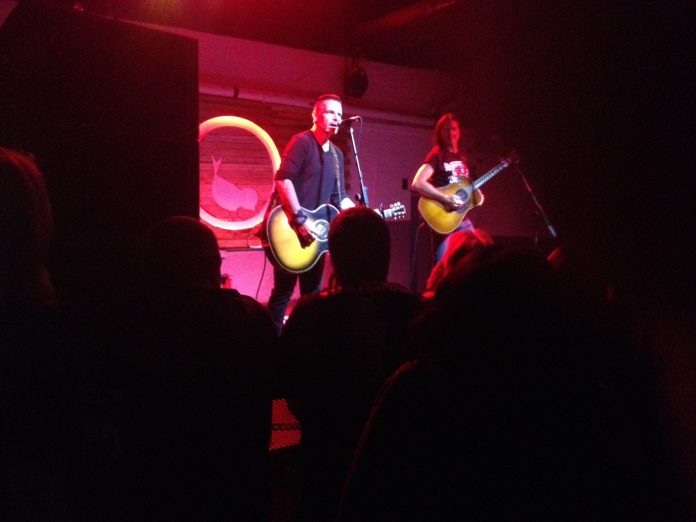 “Here’s a happy little tune about killing your wife.” Shouldn’t all gigs contain lines like this? Ok possibly not, but Steve Mercy’s does. As you might expect, the track is a cross between Nick Cave and Johnny Cash. And it’s rather good. The former Abigail’s Mercy frontman is a superb acoustic singer/songwriter these days, but as songs like AM’s “After The Fall” prove, he probably always was. “All He Wanted” is a plaintive, brooding thing, reminiscent of Dog’s D’amour circa “Graveyard Of Empty Bottles” in that context, then the happy “I Found You” is a jarring contrast. Along the way there’s also the bluesy “Wrecking Ball” (about his Daewoo) and “Paranoid” acoustic. It takes balls that. In Birmingham too. But Steve Mercy – as last time we saw him, on tour with Toby Jepson – gets these gigs because he can pull this off with ease – bonus points are accrued for adding “Youth Gone Wild” before he’s done, and as he gets his brother up for “Twentieth Century Boy” you sense everyone concerned rather enjoyed themselves.

So good they did it twice. Ricky Warwick and Damon Johnson evidently enjoyed their tour in the spring so much that they did it again. The hardest working duo in rock n roll? Possibly. The fact is, though, that the two Black Star Riders’ just seem to love what they do.

So just a few months after taking their unplugged show round the country, they are back. The format is still the same. There’s no setlist to speak of, there’s just two of the most talented rock n roll musicians on the planet having a laugh with each other and their audience and providing wonderful entertainment along the way.

The set is admirably different from the last one. It starts with one of the tunes from Ricky’s storming new solo records “Celebrating Sinking” and then segues into “No More Mister Nice Guy” (Johnson is a former sidekick of Alice) it’s that kind of night.

Watching these two play live is a cross between the best buskers you’ve ever seen and the best bar band in the world. They can call on a back catalogue that everyone else would surely kill for – The Almighty, Black Star Riders, Brother Cane and Thin Lizzy as well as the aforementioned Alice – but this is a chance for them to do more. This is an opportunity to just have fun, so there’s the covers: “Ace Of Spades,” and “Death Or Glory” you might expect, “The Weight” by The Band, you might not.

But then, Warwick has always had something of the troubadour about him, that’s why he was such a natural choice for the final Thin Lizzy version and why he’s so brilliant in Black Star Riders. The Almighty songs that are played here (“Free n Easy” and “Wild And Wonderful” were probably not written with acoustics in mind, but are such brilliant songs that they transfer easily, and the Lizzy are just singalong classics.

They end tonight with one. “Whiskey In The Jar” might be a traditional folk song, but it’ll forever be synonymous with Phil Lynott, just as BSR’s “Bound For Glory” is the best song written in the last five years and the best thing Thin Lizzy never wrote.

Couple two genuine guys who seem to have struck up a real musical and personal bond, some of the finest songs ever written and some brilliant stories (Warwick’s oft told yarn about his invite to the Irish Music Awards is as good now as when we first heard it at the Princess Charlotte in Leicester all those years ago) and you have the recipe for a magnificent show.

It’s one that isn’t finished with the final chords either. The boys are on a mission: “Thanks for coming,” says Warwick, “We’ll see ya for a beer.”