Vodun At The Beginning 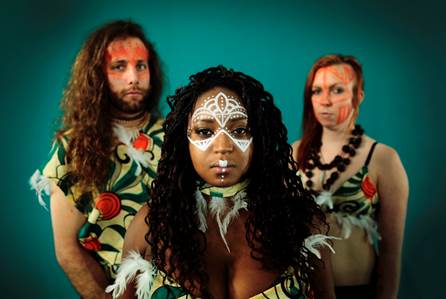 Ex Do Me Be Bad Things lady is back, and on tour with Limb next month!

“Mawu is the beginning, the life giver, the Moon. The great and equal Goddess to The God, Lisa. The creator of this world, the passion of fertility, and a grower of life and beauty. If you split yourself open, you would see that she lives within us all.”

Mixed by the Brit-nominated Tom Dalgety, Possession is a voodoo-fuelled, afro-tinged trip through history, devoted to understanding the magnificent and complex past of Vodun cosmology – an ancient West African religion that VŌDŪN channel into the spell-binding sounds that take hold throughout Possession’s intense 11-track voyage. “The music is made to represent how we see Vodun and understand its beautiful, complicated and powerful history,” Oya explains. “Exploring how Possession itself might feel in its binding and opening of the soul, we’ve taken our view of the world and married it with how the Spirits, Gods and Goddesses might entangle themselves in our own lives. The movement of the music is us bearing our souls, reflecting how something that has been demonised for so long can actually be something to wholly embrace.”
VŌDŪN comprise of three central forces, rather than individuals. Together Oya (vocals), Ogoun (drums) and Marassa (guitar) revolve around the spirits that govern the Earth itself. They are understood as follows.

Ogoun (drums); from a new nation of spirits forged directly in ﬁre, steel and blood – reﬂecting all the rage, violence and delirium that comes with rebellion. Drums, dancing, and rhythm are offbeat sharp and unforgiving, like the crack of a whip. Ogoun is in love with the noise of battle itself. In salutation, rum is poured on the ground then lit, and as the ﬂames ﬂicker, the beats play on.

Marassa (guitar); summons a tidal cacophony with his ﬁngertips that wails and thunders into the resonant mountains. He unleashes the twin spirits within, as the electric swordsman of two halves. A healer and a troublemaker, consuming all in his wake – and spewing forth a divine power.

Oya (vocals); stormy emotions and tempestuous circumstances prevail, and Oya is the conductor at the centre of the destruction and chaos. Channelling spirits past and futures unknown – she unleashes the possession in other worldly chants and unearthly melodies. With big and open eyes she breathes, blows up her cheeks, then howls. Oya is the spirit of change, and she makes room for vibrant new growth.

Collectively, they are VŌDŪN. Heavy, weird, soulful – yes, they are expectant of the abnormal and so should you be. Following the release of debut LP Possession on March 25th the band will hit the road with London doom trio, Limb in April on the below co-headline dates.

Their debut album Possession (due March 25th via Riff Rock records) was mixed by the Brit-nominated Tom Dalgety (Royal Blood, Turbowolf, Band Of Skulls), they’re touring in April with the mighty Limb, who we like so much we’ve put their new video on here too!