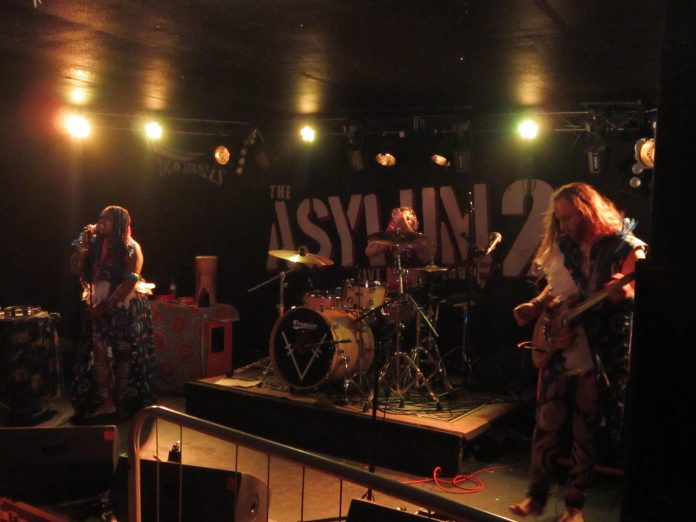 Tonight, is the second evening in just over a week that I’m checking out a band that has been recommended to me. This time a trio from London called VŌDŪN. An interesting name and according to Wikipedia : Vodun (meaning spirit in the Fon and Ewe languages, pronounced [vodṹ] with a nasal high-tone u; also spelled Vodon, Vodoun, Vodou, Voudou, Voodoo, etc.) is practiced by the Ewe people of eastern and southern Ghana, and southern and central Togo; and the Kabye people, Mina people, and Fon people of southern and central Togo, southern and central. The band are a soulful afro, heavy, psych outfit that are half way through a UK tour before heading over to Europe for most of October.

There`s a real hush and air of anticipation as the lights go down and troupe arrive on stage, resplendent in their tribal face and body paint. Then for over an hour we have a brilliantly theatrical, vibrant, energetic and at times spellbinding performance. The band comprise of three elements, or type of gods with Chantel Brown (Oya) on vocals, Linz Hamilton (The Marassa) on guitar and effects and Zel Kaute (Ogoun) on drums and this works wonderfully well, as each brings their own influence and input to the part

The recently released superb album `Ascend` is the prime focus of tonight with `New Doom`, `Started From` with it`s deeply thoughtful lyrics and the wonderfully aggressive `Spirits Past` the real standouts for me. The band also share a couple of my favourites from their 2016 release `Possession` with the hypnotic `Minos Army` and `Mawu` it was interesting to watch the audience tonight, with them going from almost polite foot tapping to all out entrancing dancing frenzy, such was the effect the band and the music had. They come together to comprise a formidable unit. the drumming was breath-taking, the guitar sounds perplexing and what a vocalist!! I love strong female vocalists and Chantel is up there with Skin from Skunk Anansie and Beth Ditto from Gossip.

MOJO magazine stated that the band were “Like Aretha fronting Royal Blood after imbibing ayahuasca” and I’d find that hard to disagree with. As the late, great Nina Simone sang “I Put a Spell on You” well watch out, for VŌDŪN certainly will.