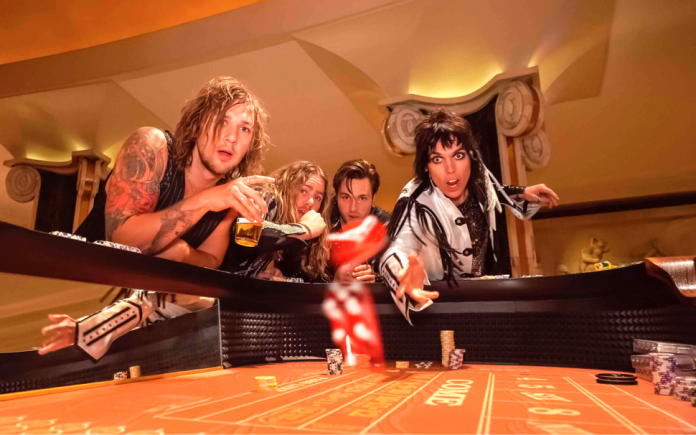 British glam-rockers The Struts have shared the new video for ‘Primadonna Like Me’. The video follows the announcement of their highly anticipated new album,YOUNG&DANGEROUS, out October 26th via Polydor Records.

A raucous barrage of exuberant excess, the video sees the band take a wild trip around the glistening casinos of Las Vegas’ Caesars Palace Hotel. Surrounded by screaming fans and dripping with foot-stomping, disco-inflected, glitter-drenched swagger, the video also features footage from their recent sold out San Diego headline show.

“Not long ago we flew from the UK straight to Las Vegas and shot a music video in the early hours of the morning,” says frontman Luke Spiller. “Rolling around the casinos and a huge penthouse, we had a lot of fun with ‘Primadonna Like Me.’ Not quite sure how we managed to pull this off, but here it is for your own viewing pleasure. Enjoy and don’t forget to be a Primadonna, baby! X”

The track is taken from the band’s upcoming album YOUNG&DANGEROUS, the follow up to 2016’s critically acclaimed Everybody Wants, in addition to the previously released ‘Body Talks’ and most recent single ‘Bulletproof Baby’. The album will also feature their explosive collaboration, ‘Body Talks ft. Kesha’.

On YOUNG&DANGEROUS, The Struts let loose with the sing-along-ready and riff-heavy sound they’ve brought to stadiums and arenas all around the world, adorning that sound with deeper grooves and inventive textures, dreaming up a majestic glam-rock masterpiece that’s unabashedly fun but full of pure heart.

The band have also announced a UK tour for February 2019, which sees them play eight shows, finishing with London’s O2 Shepherd’s Bush Empire on the 26th.

In just a few years, The Struts have found themselves embraced by some of the greatest icons in rock-and-roll history. Along with opening for The Rolling Stones, The Who, and Guns N’ Roses, the U.K.-bred four-piece was hand-picked by Mötley Crüe to serve as the supporting act for their last-ever performances, while Dave Grohl praised them as the best band to ever open for Foo Fighters.

They also made their most high-profile US TV appearance to date this week, in front of more than 12 million people, performing their 2016 US hit single ‘Could Have Been Me’ and a cover of Janis Joplin’s ‘Piece Of My Heart’ with UK teenager Courtney Hadwin, who was a finalist on the show. You can watch the performance HERE