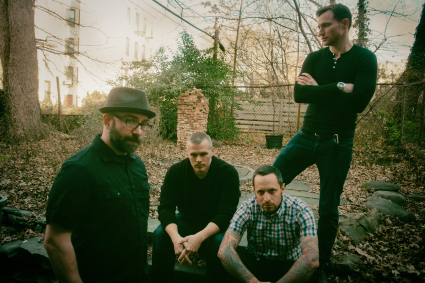 All the latest as sonic innovators are two weeks in

Vision of Disorder are two weeks into recording of their still untitled new album.  Currently being recorded at Frankie Nasso’s Staten Island-based Nova Studios, the new album is expected for an autumn release and follows up 2012’s The Cursed Remain Cursed.  The album is being be produced by Zeus (Agnostic Front, Crowbar, Hatebreed, Whitechapel).

“Things are going very well,” shares vocalist Tim Williams of the recording process.  “Rhythm guitars, bass and drums are now all completed.  I am 5 songs deep with vocals and the songs are killer.  We should be finished tracking by August 9th.”  Williams previously revealed, ” “the new songs are dark, heavy, and melodic in a way only Vision Of Disorder can deliver.”  A few working song titles for the still-to-be-named album include “Razed to the Ground,” “War On The Police,” and “Nightcrawler.”

Lambgoat called The Cursed Remain Cursed, “a rock-solid return for the seminal metalcore act.  Credit V.O.D. for taking such a long hiatus and coming back just as sharp and pissed-off as anyone could hope.”  The album, produced by Will Putney (Poison The Well, Suicide Silence, The Acacia Strain) and mixed by Cameron Webb (Ignite, Pennywise), was the band’s first new album in a decade.  On its release mid-September 2012 The PRP said, “the effort more than lives up to the high bar the band have previously set.  Truly Vision of Disorder‘s long-awaited return sees them emerging even more fearsome.”  Revolver Magazine called it “a welcome return.”

One of the most innovative and widely admired bands to emerge from the collision between hardcore and metal, Vision Of Disorder exploded from the streets of Long Island in 1996. “Vision Of Disorder took a much needed baseball bat to the head of stagnant hardcore,” noted Decibel when describing the band’s unique sound.  Twenty three years on from their formation, the band continues to deliver a heady brew of savage riffing and fearless proclamations that merge their sonic past with new vitality.