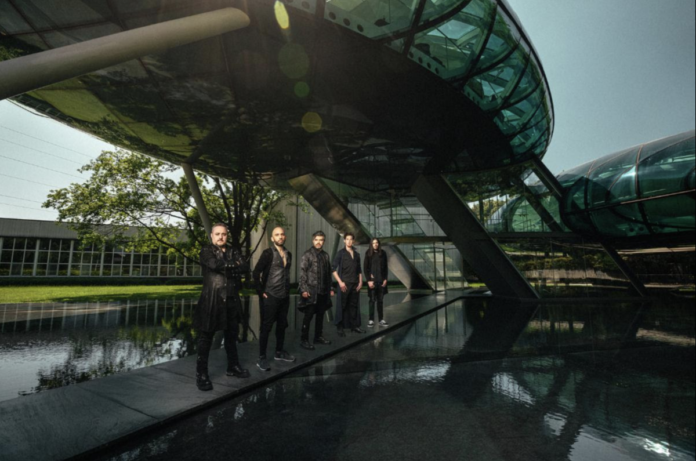 Featuring eight immersive songs, Virtual Symmetry was recorded by the band then mixed and mastered at Domination Studio by Simone Mularoni (DGM, Michael Romeo, Turilli Lione Rhapsody) and completed with artwork and photography by Kyrhian Balmelli.

The new video was directed by Giampiero Zappa. VIRTUAL SYMMETRY vocalist Marco Pastorino writes, “We decided to release the video of ’Fantasie Di Verità,‘ one of the most appreciated tracks from our latest album and one of the most requested tracks of the tour with Evergrey. We enjoyed every single day and every single moment of these thirty-four shows all over Europe. We can‘t wait to see all of you again next year”

Virtual Symmetry is out now through Sensory Records on CD and digitally at the label webshop HERE: https://www.lasercd.com/cd/virtual-symmetry-preorder

VIRTUAL SYMMETRY was founded in 2009 as a solo project of guitarist Valerio Æsir Villa, when the first ideas for the debut album, Message From Eternity, began taking shape. The band‘s lineup has since expanded to now include vocalist Marco Pastorino, keyboardist Marco “Mark” Bravi, bassist Alessandro Poppale, and drummer Alfonso Mocerino. Featuring members of Temperance and Fallen Sanctuary, the band is a revelation in the progressive metal universe, stunning their fans and listeners with influences which range from classical music to contemporary metal and a style characterized by epic suites, rich of cinematic elements and balance between melody and technique, leading the listeners through a dynamic and emotional journey in each track.

“For VIRTUAL SYMMETRY, they aren‘t just a prog metal band, they are their own sound and vision. With audiovisual-like beauty, and probably the brotherhood between the four members of the group, it is an epic paragon that they‘ve unleashed for 2022.” – Echoes And Dust

“No aspect is neglected here, whether we are talking about the excellent level of compositions, the flawless execution or the impeccable degree of production, we are really entitled to a neat and professional work. It will certainly be a wonderful discovery for all progressive metal fans and a great introduction for all those who wish to broaden their musical horizons. 9/10” – Profil Prog

“The twenty-minute opening track in particular is an amazing demonstration of the band‘s talents, covering the full range from heavy, to soft to somewhere in between, and it allows all of the musician‘s plenty of room to shine, along with the vocals. 9/10” – My Global Mind

“Virtual Symmetry is slickly produced, well written, and features top-notch performances. The band is clearly aiming for the same rarified air as the bands mentioned, and they come pretty close across the entire album.” – Heavy Music Headquarters

“I like the restraint the band shows when it comes to the piano and keys. They are just enough to tantalize your senses. I don‘t think that I need to mention the vocal prowess of Marco Pastorino, but in case I do, just know that he has one of the best voices out there right now, in any genre. Get this before it burns a hole in the packaging.” – Metal Temple