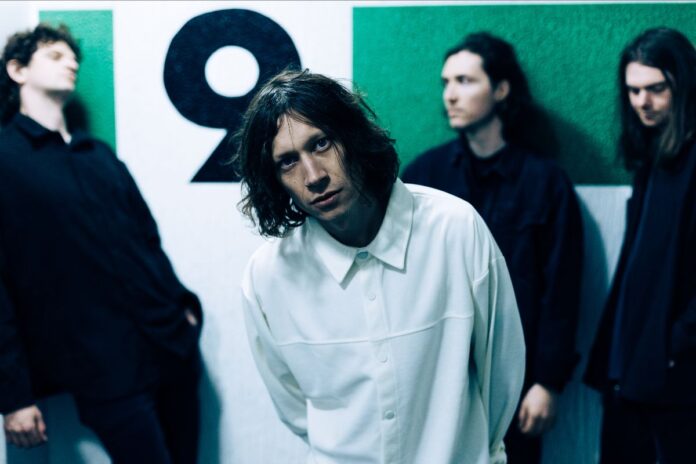 October Drift have released their brand new single ‘Webcam Funerals’, the latest song to be taken from their forthcoming album I Don’t Belong Anywhere out September 23rd via Physical Education Recordings.

‘Webcam Funerals’ is a punchy rock track that mixes the personal and universal to devastating effect. Its infectious groove, hard-hitting riffs and exceptional lyricism reflect a pivotal moment for frontman Kiran Roy and the rest of the world. The track is available on all streaming platforms now here, and a video capturing the incendiary live shows of their headline tour earlier this year can be seen here.

“I don’t want to go into too much detail out of respect,” begins Kiran, “but this song was written at the time of losing a friend during the height of the pandemic and lockdown. She passed after a long battle with cancer. Her son, a very close friend of mine, was living with me at the time of the funeral. I watched online from my front room, while many others did the same from their homes. This song was a response to the strangeness and sadness of friends and family members not being able to be at the funeral or there for each other at that time.”

‘Webcam Funerals’ is taken from the forthcoming album I Don’t Belong Anywhere, a taut, visceral record, and a step forward for the band into an even more powerful, brutal sound following their highly acclaimed debut album Forever Whatever in 2018. Far less introspective than their debut, I Don’t Belong Anywhere is October Drift’s totem for bringing us all together again. “A feeling of not belonging is something everyone feels or has felt,” explains Kiran.

I Don’t Belong Anywhere features previously released singles including the dark grungy ‘Insects’, “a coming-of-age song, about feeling life pull you in different directions”, and the biting reflection on the harsh backdrop of 21st Century living ‘Airborne Panic Attack’.

October Drift have been treating fans to songs from the forthcoming album live at festivals this summer. Their next festival is Vestrock in the Netherlands on June 3rd and have more to be announced soon.