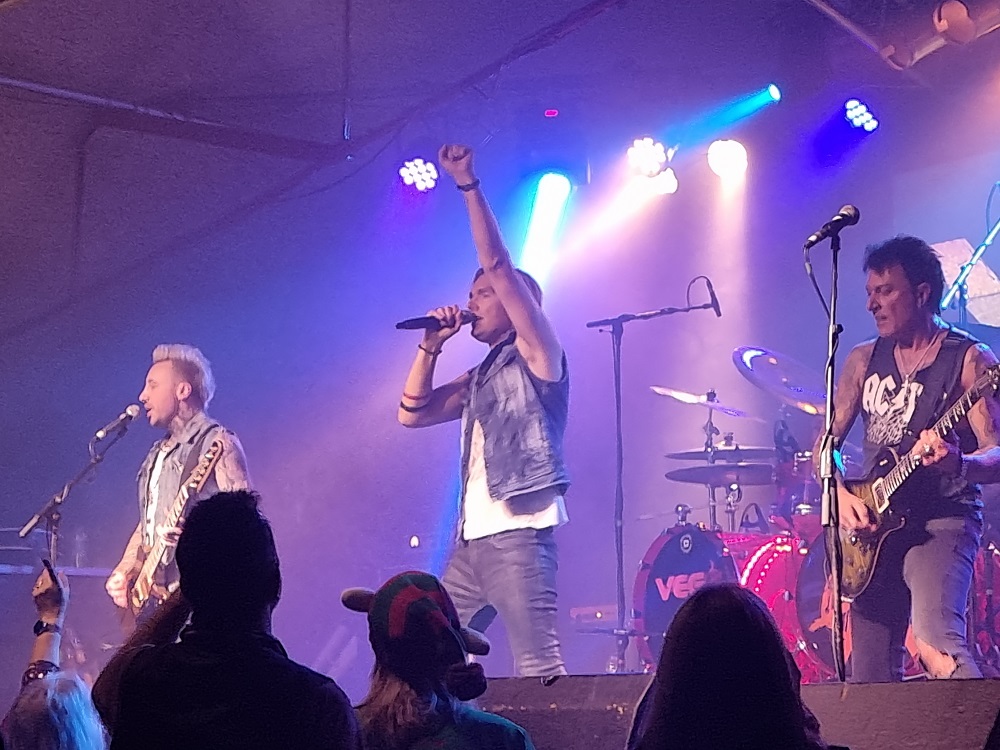 We have some mighty fine bands in the “underground” (for want of a better term) at the moment. Revival Black are one of the very best too. I’d loved their record, when it emerged in 2019, but this is the first chance I’d had to see the Liverpool lads live. I am struck by something I’d said in the review of that album “Step In Line”. It was, I’d written “the absolute antithesis of pretentious, precious, and deep. This is merely classic, sleazy rock n roll played by five lads from the North West who just wanted to make a rock n roll record.” Watching them here that seems underlined and then some, but the fact should not be forgotten that they are superb musicians, but there’s not an ounce of arrogance about them. Instead singer Dan Byrne roars his vocals, but still has the air of a chap that is grateful to have had the opportunity to be on this stage. “So Alive”,  the new song in the set “Believe” or the slowed down version of Deep Purple’s “Burn” that they do here, are all bound together by a thread of quality. And that’s a word you keep coming back to because that seems to underpin the whole thing. Ending with a few choice ones from “….Line” is entirely right too, and both “No Secrets, No Lies” and “Wide Awake” are strong enough to end this set, although it is the latter that does. A band with a lot to look forward to moving forward.

I can’t be the only one in The Robin who’s heart sank when frontman Nick Workman announces “there’s one more, and we like to do something special at these Christmas shows….” Not another cover of Slade, surely, or worse, one of those ironic pop ones. Please no.

But you see, Vega, they aren’t going to let us down, so begins the riff to Def Leppard’s “Animal” and there’s not a stocking on the wall or any Wham shite to be seen.

That over and done, as we walk out of the venue, Bon Jovi’s Bad Medicine kicks in over the PA and a thought strikes MV. Nick Workman and the other three members of Vega that have been with him since the start (ignore the two newbies for now) are probably a similar age to us. They probably bought the Leps and Jovi records on the day they came out, the same as we did.

And fast forward 32 years since “New Jersey” came out, I’d argue there’s not a band better at playing hard rock of this type anywhere.

Not only do they love what they do, but my goodness they are good at it. Workman is energetic and he has a presence, when they play “Stereo Messiah” he commands the crowd (a healthy one, given that Thunder are playing a sold out gig a couple of miles away) as well as any arena bound frontman ever has, but crucially they’ve got seven albums now to pick from. It makes for a 90 minute set with no dips.

The most recent “Anarchy And Unity” album is well thumbed and “Beautiful Lie” and “Bring The Riot” in particular thump home bang on target. The album’s big ballad “Live For Me” (“someone’s getting sacked” says Workman when his acoustic doesn’t work – it’s not plugged in….) is a chance for Billy Taylor to show his stuff and the former Inglorious man looks at home in these new surroundings (“he’s only in the band to bring the average age down” offers the singer) and together with drummer Pete Newdeck (who was in Eden’s Curse) seems to have injected new life into the band.

There’s so much energy about the likes of “Monster” and “Kneel to You” that you can’t fail to get swept along, and the way they cleverly weave in the new and the old like “White Knuckle Ride”, – almost 10 years old – shows a band of real skill.

And a band with a camaraderie too, Lord knows what guitarist  Marcus Thurston did with Mince Pies on the tour bus, but it’d no doubt make me blush and it apparently put Workman off them for life….but that banter is a decent indicator of a band that really likes each other, for sure.

Vega don’t seem to want to rest on their past either, given that they end with “White Flag” and “Sooner Or Later”, both from the newer end of their material, and why should they? Into their second decade, who knows how long they can go on.

A gig with a couple of take-aways. First I’d only seen Vega do support sets before, but they are born to headline – and second, I’d forgotten how much I love Def Leppard.