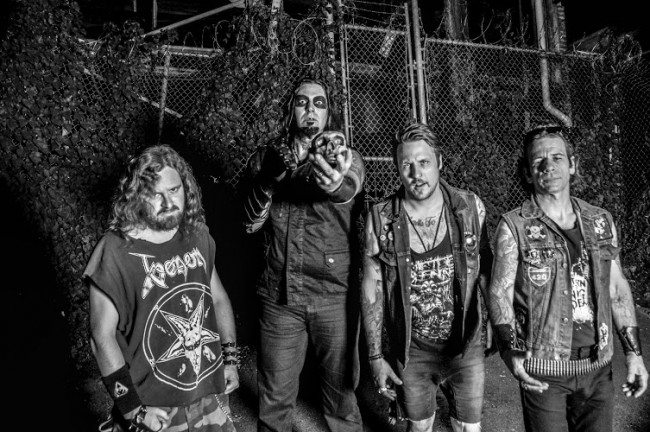 Vancouver, BC’s SAINTS of DEATH (a name inspired by the Mexican folklore of Santa Muerte (Spanish for Holy Death)) is a four piece that originally began as a Motorhead tribute band that has now taken the reins to write original material with a double bassist attack and set themselves apart from the pack with their unique heavy sound of thrash, doom and hardcore metal.

Fronted by vocalist and eight string bassist Twan Holliday, a giant standing nearly 7’ foot tall who can also be recognized for his acting credits in some well-known Hollywood movies and pro wrestling (credits below) is joined by four string bassist Darren Morris, guitarist Phil Henri and Christopher James on drums to complete a ferocious line up that will be unleashing their self-titled debut EP on September 25th.

Leading up to the EP’s release, the band is offering a FREE DOWNLOAD of their track ‘Angels & Demons’ at the following links:

“This song is written about an old man on his deathbed. Not happy with his life he struggles though a battle between the right and wrong he has done and who will take possession of his soul; angels or demons.” comments drummer Christopher James.