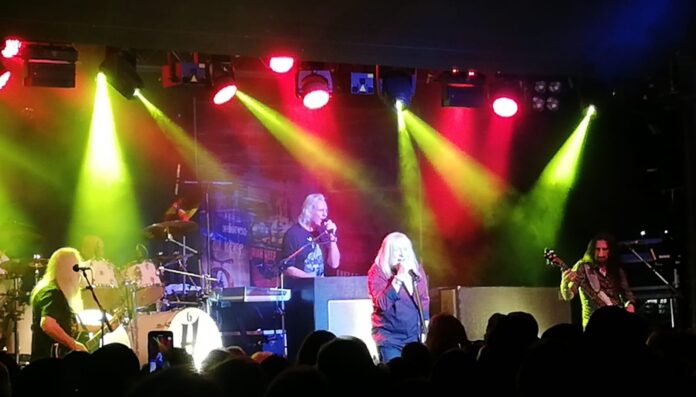 Before they come on stage, Uriah Heep play a video on the big screen with the great and good of rock wishing them a Happy Anniversary. Rob Halford of Judas Priest congratulates them on a great career in “rock, metal, hardcore, whatever we call it, we know it what it is”.

Unwittingly, perhaps the Metal God has got to the matter at hand: Uriah Heep are an outstanding rock band, but (rather like Magnum, maybe?) they don’t fit in to a neat box. They are on stage tonight for getting on for two and a half hours all told, and in the course of it there is a little bit of everything – but there’s nothing you can pin down for definite.

First, there’s the acoustic section. Cleverly, they work a number of their songs that work brilliantly in a stripped down way. “Tales”, for example, is whimsical, folk even, but this is balanced by “Free Me”, which sees Bernie Shaw out of his seat and there’s a big sound to it, almost effortlessly. “Water’s Flowin’” brings things to a more modern era, while there’s a couple of superb medleys: “Confession/Rain” is a beauty. Phil Lanzon’s piano is perfect to go with Shaw’s voice, and Lanzon is at it again, his synth joining the trio of “The Wizard / Paradise / Circle of Hands”.

This is obviously a show that has been planned so well, and the opening set’s de facto encore, if you will, sees “that little folk song” as the Heep leader Mick Box, puts it, “Lady In Black” placed at the end. It is superb too.

That done, the chairs have gone and the clothes are different and – according to Shaw – “it’s time to have a little fun”. This is the electric set and as “Against The Odds” ushers itself in on the back of a smoke bombs and screeching guitars, “Welcome to Part Two” indeed.

As a rock band Uriah Heep are a special one. Even in this loud section, there’s some real breadth to the material. “Traveller In Time” has a real groove, and drummer Russell Gillbrook is in top form here in particular, while “Between Two Worlds” is built around some real Deep Purple style organ.

Not just a history lesson – and credit to them for that – “What Kind Of God” from this century is Shaw’s favourite from the “Wake The Sleeper” album, he says, and the gravitas of the track shines here.

It’s a real band effort too. Dave Rimmer the bass player since 2013, is to the fore on “Stealin’” and its interesting to note that he is the newest member of the troupe. Many of them have been around for well over 30 years, which perhaps accounts for the chemistry here, which in turn means that whether it’s the proto metal of “Too Scared To Run” or the harmony of “Sunrise”, there’s a quality and a class.

It’s well paced too, “Sweet Lorraine” bounces along, while “Free N Easy” and a thunderous ballad “July Morning” end the set, showcasing again just how much difference there is in this material.

There’s a nice touch before the encore, with all the former members of the band being up on the screen, so they are part of the evening, but the current lot capture the zeitgeist too, “Gypsy” and – to quote Shaw – “you didn’t think we were gonna leave before we did “Easy Livin’” did you?” and what a song it is, and what a band this is.

Now 52 years old (these shows were put back before Covid), as Box points out: “We’ve done shows in 62 countries” and they’ve sold 40 million albums worldwide, they maybe go slightly under the radar in their own country. Nights like this, though, underline the thought put forward by Pete Agnew of Nazareth on one of those messages at the start: “it takes a lot to make it in this business,” he’d said: “but to stay there for half a century is an incredible achievement.”

It really is, and this show exemplifies why.