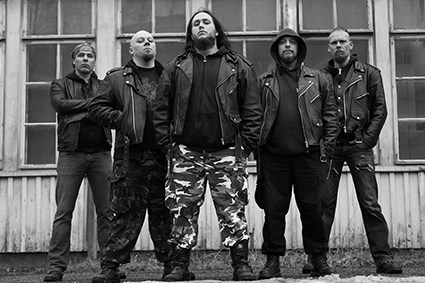 “Mother War” plows its way through 10 tracks of 90´s mid-tempo Death Metal; displaying brutality, respect for traditions and groove, three key elements that can be found in every SHRAPNEL STORM song.

The band commented about the new album:

“You can make your debut only once, so our goal was to make it sound like a beast. We took everything super seriously, and mediocrity was not a choice at any point. Our goal was also not to release a demo compilation, so we took a lot of time rehearsing and writing new songs. The process lasted about a year, including some really harsh times, but the result is worthwhile.”

Produced by Aadolf Virtanen (Diablo) and including special guest Zachary Hietala (Tarot) among others, “Mother War” will be released by the German Label WITCHES BREW this coming May 29th. Cover art and track listing can be found below. Stay tuned to the WITCHES BREW Facebook page for preorder information.