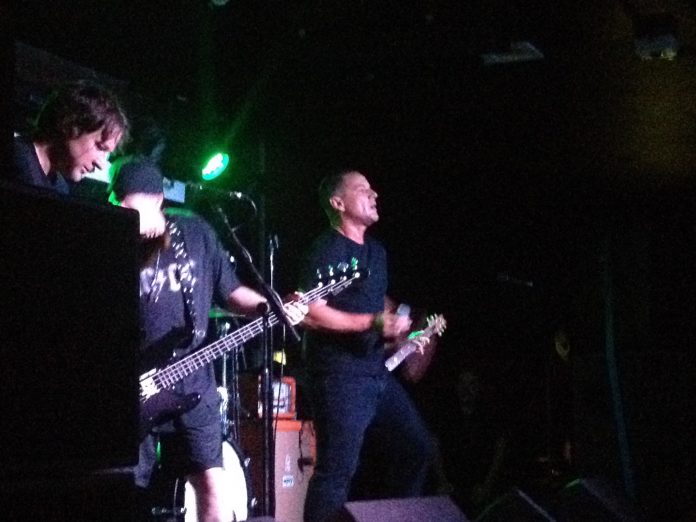 Uglier than they used to be, better than ever and Wolverhampton eats out of their hands


If Ugly Kid Joe singer Whitfield Crane got together with original Godsmack guitarist Lee Richards that’d be bombastic, right? Well not Richards/Crane, the stools are out and the amps are off here. Actually Messrs Richards and Crane are merely continuing their alliance. The pair had played together before in Another Animal, and they air one of those songs here, “Left Behind” is stripped back and bluesy, and isn’t out of place amongst the laid back, chilled out ambience. “Homeward” which begins the show, is plaintive and full of longing, and “Someday,” which Crane says is his favourite song on the bands new record, is drenched in reverb and brings to mind “Jar Of Flies/Sap” era AIC. Augmented to a three piece here for these shows, with second guitarist Tim performing a fine job, the band are in their infancy, but the Beatles-ish “Everyone” shows real class. A bit of a curveball maybe, but a thoroughly welcome one.

Speaking of Alice In Chains, between bands this evening the early output of that outfit was playing. It’s work that you’d guess Hailmary are familiar with. “Wake Up,” kicks off with a riff that Jerry Cantrell would be proud of, the rest of it isn’t too shabby either. Best described as chunky, downtuned and excellent, the Aussies busy themselves making friends. Singer Kev Curran is – he tells us – a Newcastle United fan, so maybe that accounts for the misery that’s shot through “Monday, Monday,” which takes the start of the week blues and gives them a knuckledusters. Recent single “My Song” continues the theme and comes out swinging. “Don’t Let The Sun Rise” is another strident little rocker while “Yellow Line Of Death” is perhaps their heaviest track. The band clearly have a bright future. What they don’t have, it transpires, is anywhere to stay tonight, so as they leave the stage, the search for somewhere to lay their heads begins. Surely, four young Perth natives, and ones who can play as well as the closing “Good To Go” suggests they can, probably didn’t need to worry too much……

During Hailmary’s set, their singer, perhaps inadvertently, hit the nail on the head. “The first album I ever bought,” Kev had said, “Was ‘America’s Least Wanted’ so, you best believe it means a lot to me to be on this stage”. “…..Wanted” was – lest anyone forgets – a tour de force of the early-90s in amongst all the po-faced grunge (and their preceding debut is still the biggest selling EP ever), here was a band who had a smile and seemed to understand how ludicrous all this was. They burst onto the scene, had a song on “Wayne’s World” that sold by the bucketful and even though, like most of their contemporaries, they split up, they reformed in a pretty low-key way around the turn of the decade, realising a record called “Highway To Hell” as they did. Some shows with Skid Row a couple of years ago proved they were a formidable live act, and now this. Like most of the shows its sold out too, so maybe Curran isn’t the only one who considers the band important.

But to pressing business and the matter in hand is this: UKJ stuck out a new album yesterday, albeit with a typical lack of fanfare, (whilst with trademark self-deprecation, it’s called “Uglier Than They Used Ta Be”) and although they play a song or two from it – the stomping “She’s Already Gone” particularly impressive – they are savvy enough to know people here (mostly) want the hits, which is why they charge out of the blocks with “Neighbor” and that’s why for the next hour and 20 minutes The Slade Rooms is turned into party central.

Ugly Kid Joe – who took their name from a parody of Pretty Boy Floyd, fact fans – are nothing short of a sensational live act. “Jesus Rode A Harley,” and “C.U.S.T” both from their second full length record, sound superb here.

Crane is still a frontman of considerable skill, and has the crowd twisted round his little finger by the fourth song “Panhandlin’ Prince”, while the band – and this is a genuine reunion not a bunch of session musicians as these things often seem to be – are in rare form, a case in point, their cover of “Cats In The Cradle” would cloy in lesser hands, not here. It’s simply turned into a massive uplifting singalong and “I’m Alright” from their comeback EP, which follows, proves to a real bouncy favourite.

If you’d forgotten how many good songs UKJ had then the last few here might refresh your memory. “Milkman’s Son” grooves, “Godamn Devil” would probably arm wrestle a Monster Truck just for kicks such is its menace, “So Damn Cool” sounds fresher than it has a right to considering its 23 year old vintage. Oh and by the way, the encore includes “Everything About You” nuff said?

The climax also includes “Ace Of Spades” and as that finishes, a thought strikes. What is classic rock? And when does rock become “classic?” More to the point, quite when MVM got to be old enough that records we brought as a 17 year old on the day they came out, are now “Classic Rock” is another matter entirely. But then what else can you call it? They rock. Better than you remembered too. And tonight was a mini classic. So there you have it: Ugly Kid Joe, ladies and gents, are classic rock.