Artistically imperious, instinctively forward-thinking and remorselessly creative, Satyricon have long since earned the right to be hailed as one of black metal’s most important and influential bands. And now they are to revisit the album that raised them from underground heroes to bold contenders on the world stage… the timeless and towering Nemesis Divina. Satyricon will return in 2016 to celebrate the 20th anniversary of this seminal masterpiece, with a never-to-be-repeated series of exclusive European shows, wherein the Norwegian trailblazers will perform the album in its entirety for the first and last time.

“It’s not what we do and it won’t happen again!” avows frontman and creative mastermind Satyr. “This band, as you know, is definitely not retrospective. But we started playing live in 1996. Our most groundbreaking milestone record came out in 1996. Nemesis Divina is the only one of the first three records that has aged really well. It’s the only one that we still play several songs from in our set to this day… so if I’m ever going to do anniversary shows and do a reissue and make it a big deal, it’s gonna be Nemesis Divina and it has to be now.”

When Satyricon released their third album in 1996, their status as one of the most significant and creatively vital bands in Norwegian black metal was already beyond dispute. But Nemesis Divina was no ordinary record or just another step along the road to infamy. Instead, this was a revolutionary and groundbreaking piece of work from a band that had suddenly hit their stride on every conceivable level. From its uniquely vibrant and impactful artwork, which broke every supposed rule in the black metal handbook with its vivid colours and refined aesthetic core, to the supremely confident and idiosyncratic songs and individual performances that heralded a newfound sophistication and a freshly incisive vision,Nemesis Divina almost single-handedly took black metal from its voluntarily shadowy and obscure origins into the glaring spotlight of the international metal scene. There are many classic albums to salute from the Norwegian scene of the early 90s and while the likes of Mayhem, Darkthrone, Emperor and Immortal undoubtedly share Satyricon’s esteemed position in the genre’s spectral hall of fame, it was arguably Nemesis Divina that most vigorously announced the arrival of this arcane musical phenomenon to the rest of the world, destroying the notion that black metal was an entirely self-contained and inward-looking subculture in the process. Most of all, however, Nemesis Divina showcased a band that finally had the skill and the musical intuition to back up the undeniable potency of their artistic vision. Sonically devastating and compositionally meticulous, songs like Mother North and The Dawn Of A New Age redefined what black metal was capable of, while proudly retaining the genre’s ageless essence and aesthetic values. 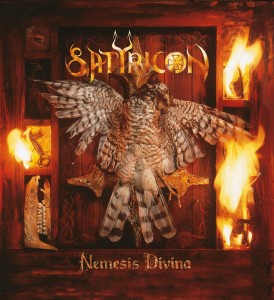 “Everything expanded tenfold with Nemesis Divina,” Satyr states. “For most people who liked the first two records, Satyricon climbed to a whole different level on Nemesis Divina and people really started to love the band. This album has a special place in our history. Suddenly we were selling 80,000 and then 100,000 records, and those numbers were unheard of in our small part of the world. That was the record that everyone that was into this scene wanted to buy. If you say there are two stages of evolution in black metal – the 80s, with Venom and Celtic Frost and Bathory, and then the 90s with the Norwegian stuff and everything followed in its wake – there are, at most, a handful of albums and a handful of songs that really define modern day black metal. Nemesis Divina is definitely one of those records and Mother North is definitely one of those songs.”

To herald the 20th anniversary of this most illustrious piece of dark art, Nemesis Divina will be re-released in spring 2016, newly remastered by Satyr himself and boasting upgraded and revamped packaging worthy of an album that has had a huge and enduring impact on both the black metal scene and underground heavy music in general.  Satyricon will then embark on a series of exclusive one-off shows, performing the record in full for the first and only time.

“Next year its 20 years since Satyricon made its live debut as a band, and 20 years since we released Nemesis Divina,” Satyr states. “I thought  ‘Either we do multiple shows, re-release the album and do it properly…or we don’t do it at all’. «So here we are. We’ll be performing Nemesis Divina, front to back, doing only a few exclusive shows in 2016 and we look forward to sharing this unique experience with our loyal fans.”