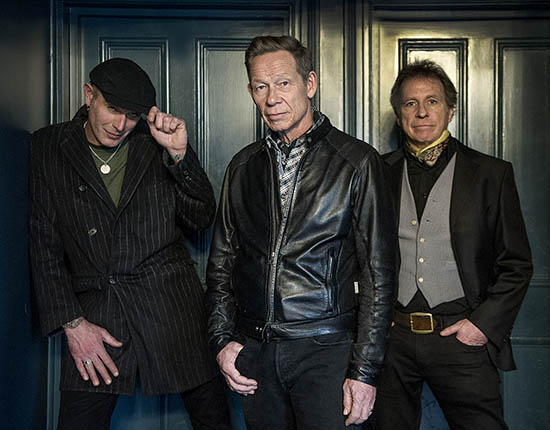 The Professionals are back! Formed from the ashes of the Sex Pistols, the band is ready to release the brand new studio album What In The World, available October 27 via The End/Automaton Records.

The album is available now for pre-order on digital, CD and LP formats. Exclusive pre-order bundles are also available on Pledge Music.

Produced by Dave Draper, and co-produced by Paul Cook and Tom Spencer, What In The World bristles with conviction and finds The Professionals in electrifying form, delivering some of the most ballsy, honest and downright brilliant songs of their career. They are joined on this album by a stellar cast of guest guitar players including original member Steve Jones (who plays on three tracks). as well as Duff McKagan (Guns ‘n’ Roses), Mick Jones (The Clash), Phil Collen (Def Leppard), Marco Pirroni (Adam & The Ants), Chris McCormack (3 Colours Red) and Billy Duffy (The Cult).
This energetic album features 10 finely crafted songs, full of rock’n’roll attitude –  including a tribute to Lemmy and Bowie entitled “Going, Going, Gone,” before closing with “Monkeys,” the Darwinian pop at world leaders. All the basic tracks were put down at Zak Starkeys studio, just outside London and were finished at Tower Studios in Pershore, while the guests recorded in various studios, both in the US and UK. The resulting album is an aural treat, with no calculated image or reliance on nostalgia.
The Professionals have created a truly honest album and it is the sound of a band at the top of their game, which is an all too rare commodity in today’s world. Look no further than the first two singles “Rewind” and “Good Man Down” that accompany the album pre-order. The lyric video for “Good Man Down” released in September, and is followed by the official music video for “Rewind,” which premiered this week with Billboard. About the new song, Paul Cook explains: “‘Rewind’ is an ode to short term memory loss.  You get to an age where everything’s familiar but you don’t quite know why. Kind of comforting, kind of scary.”
Previous article
Another Round Of J.D’s
Next article
Jess-tified Excitement