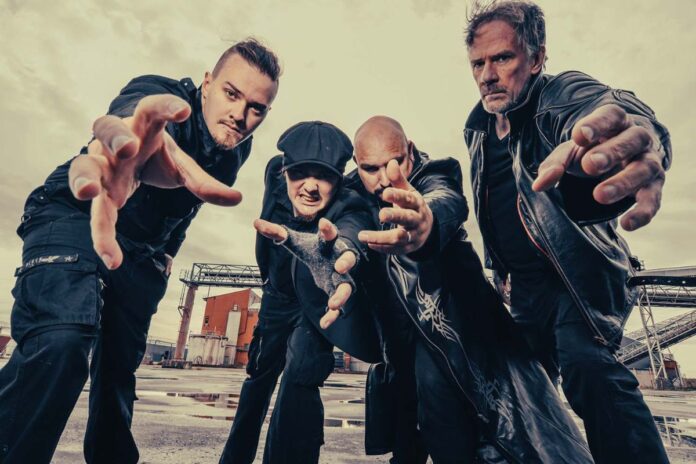 Swedish symphonic metal quartet Tungsten have revealed a video for ‘On the Sea’, the new single from their third album Bliss, due for release 17th June via Arising Empire.

Check out the video for ‘On the Sea’: https://youtu.be/8Uq8ihiOhas

‘On the Sea’ bears a strong sing-a-long chorus, as vocalist Mike Andersson explains: “I found it almost impossible to get rid of this song. It’s been playing over and over in my head for many sleepless nights. To me, this is a good sign of a good song. The melody and the lyrics have a bit of a sad undertone, as it’s about reaching for your dreams about joy and happiness.”

The quartet’s third offering is their heaviest and darkest album to date, with the typical ingredients that define Tungsten‘s music also breaking new ground and exploring fresh territories. The hooklines are stronger and more dynamic, with lyrics taking a darker turn whilst still focusing on relatable themes.

Andersson goes on to expand: “It all came naturally. Creating and recording this album truly put us in touch with the feeling of bliss. Nick and Karl, who wrote the music, have really shown their skills and musical talents. Bliss explores new musical ideas but is still based in the genre that we established in the band from the beginning.”

Bliss was recorded at Harm Studios, Trelleborg (Sweden). Nick Johansson once again took care of the mixing, mastering and production duties with the albums artwork taken care of by Andreas Marschall.

Bassist Karl Johansson states: “We really hope that Bliss will reach an even broader fanbase than before. So much pain, sweat and love has been put into this album so we’re truly excited to introduce Bliss to the world”.

Anders Johansson agrees; “This album might be one of the hardest ones I’ve had to record. Nick is close to a perfectionist at the production helm, so if I can find something that has been good about the pandemic it might be the fact I could spend many more hours in the drum studio just to practise and develop my technique”.

Tungsten reemerge onto the live scene in 2022 and are already confirmed for Sabaton Open Air in August.

Tungsten were formed in 2016 when drummer Anders Johansson (Hammerfall, Yngwie J. Malmsteen’s Rising Force, Manowar) asked his sons Nick Johansson (guitars) and Karl Johansson (bass) if they were interested in starting a brand new band with him.

Tungsten‘s music has become synonymous with melodies, industrial power metal, and hints of Northern Folk music. Tungsten‘sfirst album, We Will Rise, was released in September 2019 with the track ‘The Fairies Dance’ close to passing 3 million streams on Spotifyalone.

A year later, in November 2020, Tungsten released their second album, called Tundra. The song ‘King of Shadows’ was chosen as the first single, and has since gone on to become an anthem for Tungsten when performing live on stage.