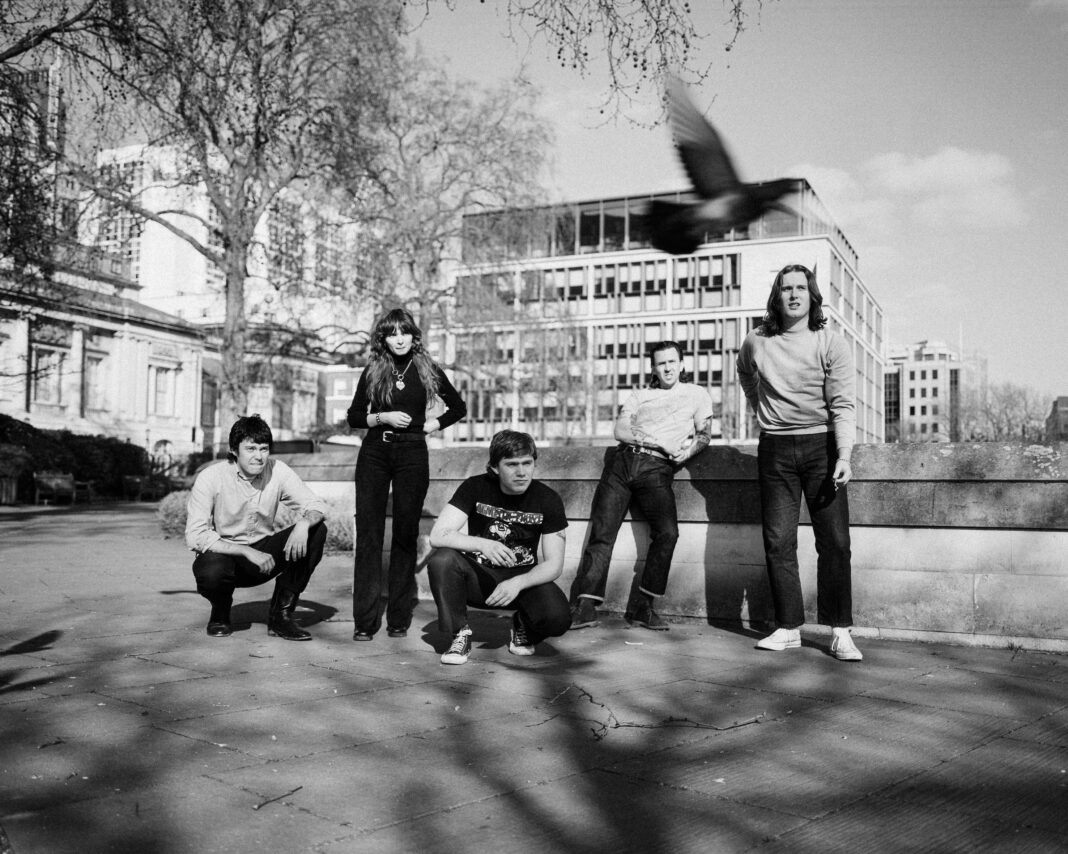 West London 5-piece Chubby and the Gang have detailed their much-anticipated second album – The Mutt’s Nuts out August 27th via Partisan – and shared its first single with accompanying music video. ‘Coming Up Tough‘ is part snapshot of modern London, part punk rager about government failure and the school-to-prison pipeline. It comes from frontman Charlie Manning Walker (aka Chubby Charles)’s own experience with one of his family members.

Watch the video for ‘Coming Up Tough’ here: https://youtu.be/y8x2knYCpLc

Charlie explains: “‘Coming Up Tough’ is about a family member of mine who ended up going to prison at a very young age for over 20 years. He went in as a kid and spent most of his life in the system. Where’s the justice in that? You come out and have to prove yourself to a world that shut you away – what chance do you have? There’s no attempt at actual rehabilitation, no empathy, just a cage to be forgotten about. I wanted the song to feel like a snowball effect. The character gets thrown out of his house at first and it feels almost juvenile, but then as it progresses you realize the real trouble he’s in. And too often once you’re in trouble you can’t get out.”

The Mutt’s Nuts was produced by Jonah Falco of Fucked Up, and features Charlie backed by Tom ‘Razor’ Hardwick, Meg Brooks Mills, Ethan Stahl, and Joe McMahon (aka the Gang). Charlie has lived in west London all his life and works full-time as an electrician, and most of the band also work trade or artisan jobs. As a result, the songs are inherently political, rather than political by design. Alongside classic rock and roll themes of love and loss, the lyrics are rooted in worker’s rights, inequality, police brutality, government failure and gentrification – issues that are built into the fabric of the UK, and magnified in the English capital.

Despite the chaos of these inspirations, Chubby and the Gang’s music is straight-forward and (for a hardcore band) accessible. While not all of the influences are apparent – they’re infinite, and range from Hank Williams to The Bobby Fuller Four to Skeeter Davis to Lightnin’ Hopkins to Brooklyn-based 50s girl groups to British blue-eyed soul and Merseybeat – they do manifest in the band’s obvious appetite to do something different, something exciting. The songs on The Mutt’s Nuts marinate speed and sick-of-it-all energy with a mixture of 50s pop sounds. The result is a prickly take on the older, more melodic genres that punk derives from, chewing them up and spitting them out into something mangled but revitalized.

Two additional tracks from The Mutt’s Nuts – ‘Lightning Don’t Strike Twice‘ and ‘Life’s Lemons‘ – were released this spring as part of a double A-side 7″ and are available now.

The Mutt’s Nuts follows the band’s surprise 2020 critical hit, Speed Kills. Thanks to an unrelentingly fun concoction of hardcore, pub rock, doo wop, and blues, the album cemented them as leaders in a pack of new bands coming out of a new wave of British Hardcore. Speed Kills received an 8.0 Pitchfork review,  while The Guardian declared them “UK punk’s most vital new band” and NME called them “the scene’s clear front-runners” and Speed Kills“a thrilling white-knuckle ride through multiple flavours of hardcore punk”.

Chubby and the Gang have confirmed a run of UK and IE tour dates later this year (full dates further below) and hope to tour the US extensively behind The Mutt’s Nuts. More info to be announced shortly. The band also performed at this year’s virtual SXSW, watch them rip through Speed Kills highlight ‘All Along the Uxbridge Road‘ HERE.