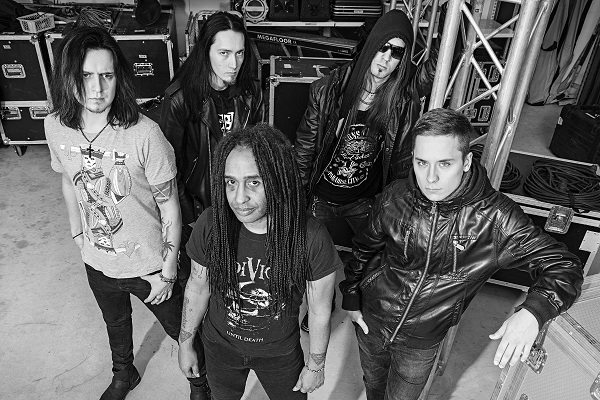 To celebrate this great event the band released their official video for the track “David and Goliath” online today.

Says singer Superstar Joey Severance “We are extremely grateful and excited to be a part of the Worm Hole Death family and look forward our future cooperation with the label. Lock up your Girlfriends, Wives and Daughters. Sleazy Thrash is coming your way!”

Worm stated: “When I got to know Joey I understood that I was in front of someone with a unique attitude and loyalty. Tornado have been pushing so hard during these years … So hard that they have been able to work with Peter Tagtgren and get a deal with Listenable Records for their debut album “Amsterdam”. This is just to underline that I was more than honored when I got their email. Their new album is like a blast and it has this unique sound since they have been able to create a very strong drive with both scandinavian and bay area thrash elements. By the way, not many words are needed here…This is a real band with a real attitude and everyone should check them out. A fucking Tornado is coming our way, this is what I wanted to say.

Tired of Tour Managing some of the biggest names in Underground Metal, singer Superstar Joey Severance decided in 2010 to put together his own band and got together with guitarist, Michiel “Big Maaaan” Rutten and together the two of them started composing songs in his bedroom. The duo, with the help if former Born From Pain drummer, Roel Klomb travelled to Belgium at Brujeria guitarist AK’s studio to record their first demo. The “band” never made the demo available to the public nor did they send it to any record labels as they knew that they had better material waiting in the wings.

After a few months, the trio got together again to record another demo with AK, which was sent out to labels and they eventually signed to France’s Listenable Records. Still with no band, Superstar Joey Severance contacted some friends from the Finnish band Amoral and together with guitarist Daddy B, bassist Johnny Wow and drummer Starvin’ Marvin the guy’s travelled to Parlby, Sweden to Abyss Studio with producer extraordinaire Peter Tagtgren to record their debut album “Amsterdamn, Hellsinki”

The album received great reviews in the press and among thrash maniacs but the band felt that the label wasn’t doing enough to push them and asked for a release from their contract to which the label obliged. Big Maaaaan decided that he was going to move to Israel to live with his girlfriend and with no ties to The Netherlands, Superstar Joey Severance packed up and made the move to Finland to find the right guy’s not only musically, but also visually.

Within two months of Arriving in Finland, SJS placed an ad on a local Finnish site explaining exactly what he was looking for and the first person to reply was guitarist Tommy Shred. Soon after bassist Henry Steel and drummer Jani Niemela also answered the ad and the guys were ready to Rock n Roll. After some time with not able to find another guitarist, Tommy Shred recommended his friend Tim Damion and the lineup was complete

The band played some local shows supporting Lazy Bonez as well as several supporting Korpiklaani (which Superstar Joey Severance sang lead vocals on their album Manala) and then put the finishing touches on the songs which would make up their next album “Black President”. Tornado entered Studio 33 in Kuopio, Finland this time under the guidance of producer Kimmo Hamalainen to record 10 tracks of their trademark Sleazy Thrash. After the completion of the new album, drummer Jani Niemela announced his departure due to continuing problems in his wrist and was replaced by Niko McNasty. After several months of looking for a new record deal, Tornado signed with Italy’s Worm Hole Death.