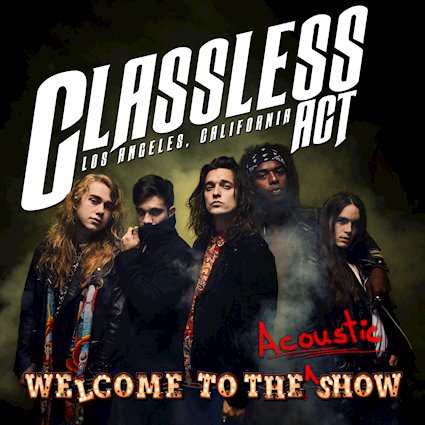 Today Classless Act, one of rock’s most buzzed-about new bands, launches a brand new acoustic music video for the LP track, “All That We Are.”  The video, that provides an all-acoustic take on the amped up, energetic original track, was shot earlier this year, live with no overdubs, at Hollywood’s Sunset Sound, the studio where the band recorded most of its debut album, Welcome to The Show  (Better Noise Music).   “All That We Are” is one of the five unplugged song/video collection, due out December 16, that also includes acoustic versions of the album’s stand-out singles, “Classless Act, “This Is For You,” Time To Bleed,” and “Storm Before The Calm.”   You can check out the “All That We Are” unplugged video HERE.

Said vocalist Derek Day, “‘All That We Are’ – is it enough for us to survive?  This is a question, a concept we found ourselves asking after all we have been through over he past two and a half years.  Hell, the past seven or so years.  We’ve been in a wee bit of a less-than-sunny time in our history.  So what are we gonna do?  Grow or go?  Everyone needs to decide.  We’ve got a show tonight, so I know what we’re doing!”

Classless Act – vocalist Day, guitarists Dane Pieper and Griffin Tucker, bassist Franco Gravante, and drummer Chuck McKissock – is currently wrapping up 2022 with a 19-city tour comprised of support dates with Giovanni & The Hired Guns, and headline shows; upcoming dates are below.  As the UK’s Louder Sound put it,  “There’s a genuine buzz about this Los Angeles band, and ‘All That We Are’ does a good job of explaining why.”