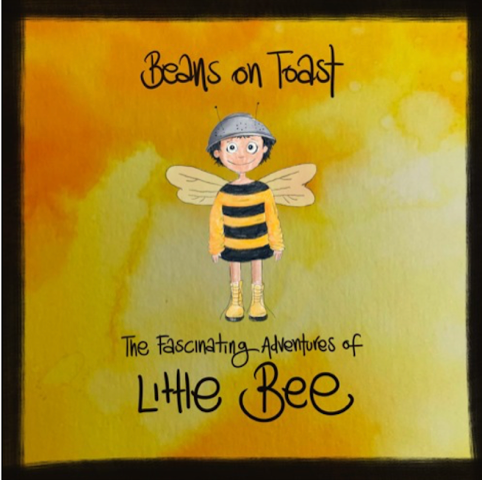 I am, just about, the proudest uncle on the planet (I actually wrote about my nieces on last year’s Beans On Toast review). Last week, I was sat reading a nature magazine with my eldest one. We were looking at a picture of a galaxy way up there, somewhere and I said “look, that’s pretty isn’t it?  I am not sure which one it is”. She looked at me with a mixture of pity and bewilderment and said: “Andy, if you read the bit underneath, it’ll probably tell you”.

She’s not quite four years old.

A few weeks earlier we’d been sat in her kitchen. I was going to a gig later that day (which she understands as “watching music” and knows I do it a lot), and she helpfully informed me that her one year old sister is “always dancing to music, when she’s older she can go to music with you. You can come to our house for tea and go in your car”.

I am not going too far out on a limb here to suggest that that type of inquisitive mind is exactly what Beans On Toast had in mind when he began this project, the one that became his album for 2022.

To give some background Beans always releases an album on his birthday. This year’s is a little different. 10 songs. Each the soundtrack to a children’s book that is based on a character created by his friends Jaime and Lily Adamsfield (who had appeared in his lyrics before).

Note the wording. A “little” different. On one hand, obviously, I am not going to be playing my little best mates “MDMAamzing” any time soon, but when you actually analyse this, it’s not as big a departure as it seems.

Go back to the 2020 track “Record Of The Day” and he’d spoken of his love of educating his daughter, Wren on the classic tunes, just as he’s been clear about his love for Julia Donaldson books (here we have to differ, as my heart sinks when I am given “Room On The Broom” to read for about the 47th time), so it makes sense.

As do the pieces themselves. They amount to a potted 16 minute history as to everything Beans believes. “Little Bee Goes To The Sea” is folk music, talking about curiosity. “Little Bee Goes to The Woods” is drenched in harmonica and teaches us (these songs are aimed at adults as much as kids) what can learn from nature and “Little Bee Goes Into Town” is rock n roll with community at its heart “when people come together, it creates society” he sings.

The music, too is essentially BoT in microcosm. A similar cast to the 2021 album, with Jack Flanagan from The Mystery Jets and Kitty & Lewis Durham, so it veers from the funk of “Little Bee Goes To The City” to the more primordial rumble of “Little Bee Goes Back In Time”  and everywhere in between.

There will be those who miss the point of this, I suppose and think it isn’t a Beans On Toast record. Yet, take away the outer layers and look beyond and that’s exactly what it is. It’s the same melting pot of music, the same ideas of community, of warmth, of welcome and a belief that the human race isn’t all bad despite what you see on the news or read online.

Never mind whether its “The Fascinating Adventures of Little Bee” or not, this is just a Beans On Toast concept album. Here’s why. These words in “…..Goes To The City”. “The most important lesson anyone can learn is the beauty of diversity.”

So be more like Beans and less like GB News. Oh, and always read the bit underneath, it’ll probably help you.

Previous article
ARTIST OF THE DAY: MIKE CAMPESE
Next article
TOP OF THE CLASSLESS