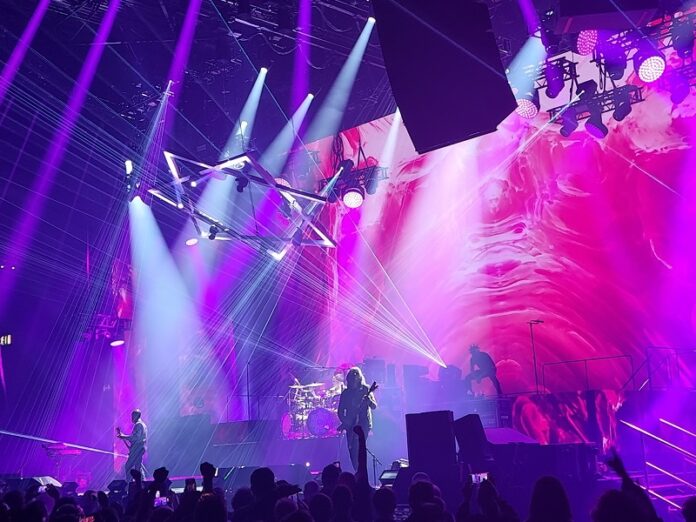 Tool have four members. They have a singer, a guitarist, a bass player and a drummer – those are the only similarities I can spot with any other metal band on the planet.

Honestly, its tough to pinpoint the exact moment when this stopped being a gig and became an event, in truth, though, it doesn’t matter. It did. It seemed to for everyone else in here too.

The bare facts are at 8.33pm, four men of middle age arrived on the stage at the Resorts World Arena and at just before 11pm they leave it. That I don’t know the time for the exit has more to do with the fact I was trying to process the bewildering assault on the senses that had occurred than making mental notes.

There’s a curtain in front of the stage, which the band play behind, that’s because the first four songs are done, effectively in 3D. Making “Fear Inoculum”, a truly sensational “Sober” and others an experience more than rock n roll.

The musicianship on these – and all of them – are like nothing you could imagine. Adam Jones’ guitar is amongst the best I’ve ever heard, his riffs are clinical, the sound is huge, the drums of Danny Carey have their own feel, and remain almost tribal.  And one of the loudest bass players on the planet, Justin Chancellor rattles the walls – literally, trust me.

Then there’s the man at the centre of this. Except he’s not. Instead, Maynard James Keenan stands on turrets to the left and right of the drums, at the back. Prowling like he’s a bear in captivity. Yet he’s magnetic, you are drawn to him, those words, that voice, and his occasional goading: “Oh, sorry, it was so quiet I thought it was Manchester for a minute” is all he says in the first two hours of the gig, basically. He doesn’t need to say more.

The net has revealed the band in full before “Pnuema” and “The Grudge” envelope you, and what the band do is hard to quantify without the cliché they don’t deserve. Some sort of sweet spot where Prog meets something Grunge? There’s a bit of that, but with a beguiling, hypnotic thing.

Let’s be honest here. Normal arena rock rules don’t apply. There’s no bombast, no massive hit songs that Radio 2 can play before Popmaster, there’s not even a conventional structure to work like “Right In Two”, but somehow, this moves in a way unlike anything else. And the drum section here is stunning.

“Hooker With A Penis” is close to being visceral, and if you were looking for the most immediate tune then, its here, as Keenan roars into a megaphone like Scott Weiland of old.

That one is the last of the main set. But even the rules of encore are eschewed. There’s a ten minute countdown, and they arrive for a thrilling “Chocolate Chip Trip” – and my how good Carey is here. You know when you normally wander in a drum solo, you don’t here.

And there’s something you can’t escape that causes this. There are no mobiles while the band is on. OK, I admit it, I got there, thinking “well that’s pretentious, they’ll never enforce it”. Well they did, and whilst, it might have been pretentious, it’s a masterstroke. Because for the first time in years, we watch the show. We are immersed in the show, we are not part of it, in the modern way, but we are watching a performance.

The band return for a fabulous “Culling Voices”. They begin on chairs – Keenan, like a tethered animal at this point – they end with foil twinkling as it falls from the ceiling, adding a gentle, calming aspect.

Phones are allowed (“take your pictures even though they’ll look like crap, and you down the front, I don’t want to see flashes….if my seven year old can work it out, so can you,” chides the singer) for the last one, “Invincible” – and the word alone makes for an obvious conclusion. However, this band is invincible. It’s stunning. This is one of the most sensational gigs you’ll ever see. It’s not a gig in any conventional sense. It’s an immersive experience.

Tool are arguably the biggest band that the public haven’t heard of, they can fill arenas without any arena rock trappings. However, the two and a half hours they are on stage show they are a band without peer.