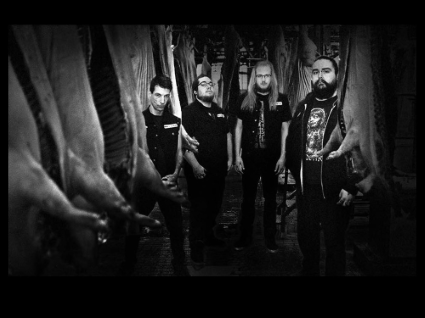 New EP out at the end of the month

Canadian Death Metallers TALES OF THE TOMB will release debut EP Volume One: Morpras on November 27, 2015. TALES OF THE TOMB is a three-headed vocal attack layered with grinding blast beats, injected with Cerberus-esque barks and finished with shrill and raspy vocals – a sound straight from Hell. Gore-filled lyrics leave little to the imagination as the band concocts song after malicious song. TALES OF THE TOMB will destroy your eardrums like a corpse is erased in an acid-filled bath.

“Out of the gates we have just under a year have played over a half dozen shows and recorded our debut 3-song EP entitled Morpras. The name is old English for “secret killing of a person, unlawful killing.” The EP is a compilation of serial killer themed music not celebrating but elaborating on the heinous crimes committed by infamous murderers. It is old school death metal with its blending of melody and groove, gives Morpras its unique sound. The first track ‘Snowtown’ will ease you into this murderous journey with a heavy groove and plenty of vocals. ‘Pig Farmer,’ the 2nd song on the EP is as fast and brutal as the slaying of Robert Pickton; the song is also accompanied with our lyrical video which will be available on Youtube. ‘Dr. Death’ also makes an appearance as the final track, a chilling slower tempo song that depicts the heinous crimes of Harold Shipman.”- John Thomson (Drums)

This concept album about murder was  recorded by Greg Wright at Hillbilly Wizard Sound Studio, and  mixed/mastered by Euro-death metal master Dan Swano (ex-Bloodbath, Unisound) and is just the first of many more sonic crimes to come from TALES OF THE TOMB. 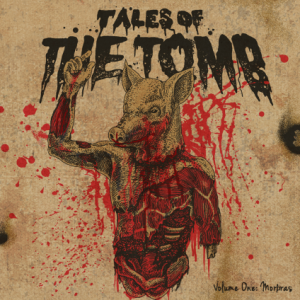 Every town has stories to caution or warn, every police officer has a seen a crime that keeps them awake at night, and every coroner has seen death in ways that the rest of us could never imagine. Murder, conspiracy, supernatural horror, and real-life terror are stains on the cutting room floor where Edmonton-based group Tales of The Tomb paints their canvas.

Unified by the desire to have the grotesque power of 90’s era death metal, TALES OF THE TOMB started as a thought that grew into an insatiable need to make extreme music. Core Skerlak and Connor Adams divided duties to guitar and vocals respectively, Bryn Herbert was sewn on to cover bass, John Thomson is the machete-swinging drummer, and finally Tres Thomas to draw out the gruesome tone as the second guitarist. Much of their inspiration is drawn from the pulp-and-grim of throwback horror comics that glorified hideous crimes and creatures, and such was the inspiration for the name; TALES OF THE TOMB.