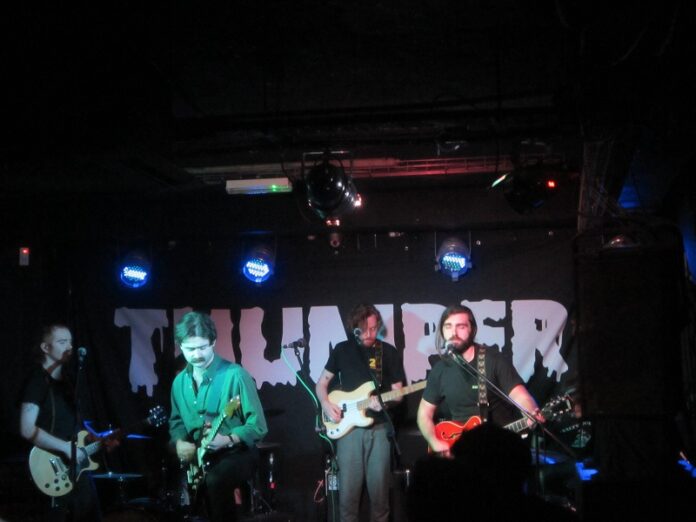 The main support tonight is local quartet Headshrinkers. Singer Garran Hickman has a pretty bad cold and what usually sounds to me like Joy Division on record come across a little like John Cooper Clarke at times. He braves out the set which includes `Caught Between Two Stools` and `Be Still`. At one point Garran rips of his shirt and along with guitarist James Knott leave the stage to flail around like whirling Dervishes in the middle of the audience, while drummer Scarlett Churchill and bassist Xavier Al-Naqib look on. This was an entertaining set where it seemed that we were being offered poetic lyrics over a musical backdrop. Headshrinkers are a band I look forward to catching again.

Sunday night in Birmingham is desolate with a lot of pubs not even bothering to open so it was no surprise that there was a sparse crowd awaiting Dublin`s much lauded psych noise pop sextet Thumper. What surprised me even more was that they had managed to fit all six members on the stage along with the two drum kits they have. The band are over here on an eighteen date tour and arrive in the UK`s second city on the latter part of this.

The night opens with `Topher Grace` named after a star on the American television sitcom `That`70s Show` a song that is a fairly intense slow burn with lyrics almost spat out by frontman Oisin Leahy Furlong. The set races along and we have `Summer Assault` and `Greedy Guts` which at times go off into lengthy almost prog rock jams.

The opening riffs to `Ad Nauseum` always reminds me of The Hives and this number that relates to the frustration of a relationship has a delightful driving beat and lyrics of “You’re going on and on and on and on and on…”. That`ll not fail to have you singing along. We had some reference to Manchester United`s heavy loss to Liverpool earlier that evening, which fell kind of flat, as either it was lost in translation or there aren`t as many Brummie Reds as one might imagine. It would seem that some of the band follow the team.

The blistering `25` follows with it`s blunt lyrics of “Jesus Christ, Is that the time?, I’m making a hames of being alive, I`m naked, i`m nothing, to no one, Jesus Christ, Is that the time?” which seems to reflect the narrator`s recognition of life passing them by. The fellas share their latest single `The Loser` and eventually close out this fifty minute set with `(You`re Bringing Me) Down` a wonderful hypnotic earworm if there ever was one.

There was much to enjoy tonight but it seemed to lack a little spark which may be down to the sporadic assemblage. Hopefully, this won`t put the guys off from revisiting our city, but maybe not on a Sunday night.