This Is Your Invitation 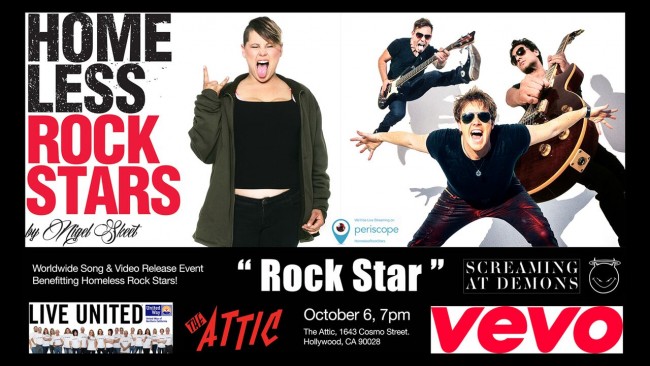 Watch the Rock Star Premiere tomorrow – and help the homeless

For the first time in history, a groundbreaking homeless project and a powerful rock band have teamed up to change lives around the world.

Homeless Rock Stars is the brainchild of international rock photographer Nigel Skeet.  After 25 successful years of being a photographer in Los Angeles, Nigel moved to Redding, California to raise his young twin daughters.  When he opened his photography studio in downtown Redding, he was warned of the “homeless problem” in the area.  This statement struck him as “bullying the underdog” and he decided to do something about it.  Over the course of three days, Nigel Skeet photographed and interviewed 50 homeless people in his studio, just like he would a rock star

The results of the event and the subsequent gallery exhibition were astounding, people were getting restored.  Homeless Rock Stars quickly attracted a lot of media attention and has been featured many times on the evening news, Good News Network and Huffington Post.

Nigel enlisted the help of his longtime friend Shimon Moore to write a theme song for the project.  Shimon enjoyed huge, international success as the lead singer and songwriter of the Australian rock band Sick Puppies and he was also the creator of the huge viral campaign, “Free Hugs.”

With his new band Screaming At Demons, Shim wrote the song “Rock Star” – but just the song was not enough, it needed a video.

On July 1st Shim traveled to Redding to participate in and film a Homeless Rock Stars Youth event, an event benefitting homeless kids.  The event was a huge success with over 70 members of the local community volunteering to interview and help restore the homeless.  Members of city council, business professionals and other community leaders all participated.

Shim also got to interview Jessie Valley.  Jessie was “one of the first 50” homeless to come through Nigel’s studio during the first event back in November.  Jessie is now part of the Homeless Rock Stars crew, she is in charge of catering.