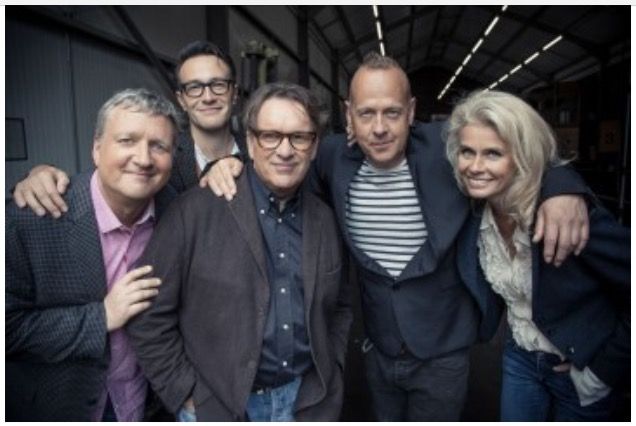 Garry reckons they are the greatest UK songwriters. Read on

I’ve lost count the amount of times I’ve seen Squeeze since the first time back in 1985 at the Odeon just down the road from the glorious setting of the Symphony Hall…..it’s at least a dozen though I reckon….and each time they deliver big time, any band that can open a set with ‘Hourglass’ ‘Is That Love’ & ‘Another Nail In My Heart’ rather than save gems like that for the encore is a band that deserves to play to packed houses, tonight at the Symphony Hall was no different.
As well as wheeling out hit after hit Squeeze have a new album out (I picked up mine earlier in the evening from the Merch Desk) it’s their first new album in 17 years and it was certainly worth the wait…..the new tracks fit beautifully into the setlist as if they had been there all their life……songs such as ‘Only 15’ ‘Nirvana’ & ‘Open’ show that Difford & Tilbrook are still the UK’s greatest ever song writers (bold statement I know but I’ll take a well known soft drink challenge to find better anywhere within these shores)
The band gathered along the front of the stage mid set to play a real Cajun foot stomping version of ‘Slap & Tickle’ followed by tweaked versions of ‘Black Coffee In Bed’ and ‘Goodbye Girl’…..brand new bass player Lucy Shaw has slotted seemlessly into the band alongside multi talented musician Melvin Duffy…..who along with the brilliant Simon Hanson & Steven Large make up one of the tightest outfits on the circuit.
The band then hit us with the song we’ve all been humming for the last few weeks due to the TV show of the same name ‘Cradle To The Grave’ which was followed by a couple of excellent covers…..’Harper Valley PTA’ by Jeannie C Riley and ‘I Don’t Want To Grow Up’ by Tom Waits….before launching into three of the greatest songs of the twentieth century ‘Tempted’ ‘Pulling Mussells ( From The Shell)’ and the first Squeeze single I ever bought back in 1979 ‘Up The Junction’ to close the main set.
After the obligatory couple of minutes off stage the band returned with two more new songs ‘Snap Crackle & Pop’ which if written in 1980 would have been a mainstay of the bands set for the last 30 odd years and ‘Happy Days’ (currently on the Radio 2 A list) before the double entendre laden ‘Cool For Cats’ (no surprise that I never picked up on those as an eleven year old back in 1979) and then to finish the evening the bands first single ‘Take Me I’m Yours’ which led the band off stage through the crowd to the Merch Desk for a signing session.
Squeeze always deliver…..the classics are still amazing as ever and the new material is a real joy to behold…..my only complaint would be that for certain members of the audience a new song is an opportunity to nip to the loo or the bar, perhaps it’s always been that way?….I wonder how many folk missed tracks like ‘Up The Junction’ ‘Tempted’ or ‘Another Nail In My Heart’ back in the day because they didn’t recognise the opening bars…..or are many amongst us nowadays simply a ‘Greatest Hits’ kind of punter.
Grab a copy of the new Squeeze album ‘Cradle To The Grave’ from one the gigs on the tour or from your local record store….you’ll be rather glad you did!
Garry presents the Unchained Rock Show on 101.8 WCRfm at 10om on Thursday nights.