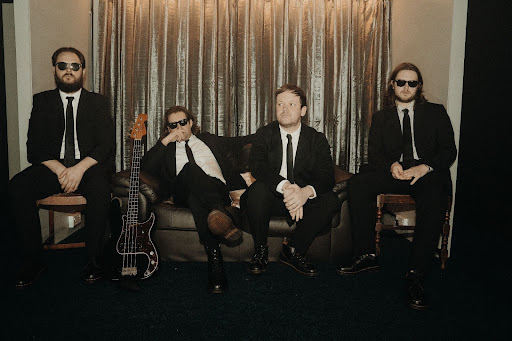 IST IST launch into 2023 with the exhilarating new single: “Something Has To Give”.

WATCH THE VIDEO HERE || STREAM ON ALL SERVICES HERE

A song that’s all about making fresh starts, taking risks, and writing new chapters; this timely release opens the new year with a tantalising glimpse into the Manchester band’s next studio album, ‘Protagonists‘, which arrives on 31 March (via Kind Violence Records).

Pulling a handbrake turn on the serene electronica of previous single “Mary In The Black And White Room”, Ist Ist’s follow-up act kicks things up another gear altogether. Driven by piston-like percussives and veering guitar lines that accelerate headlong into oblivion, “Something Has To Give” is a shot of pure adrenaline that rushes and dissipates all too soon.

“”Something Has To Give” is all about new beginnings. It’s a sort of stick or twist situation. Do you settle or go for it?”

The new single swiftly follows the insurgent comeback track “Stamp You Out” and “Mary in The Black and White Room“, all of which point the way to their upcoming new LP ‘Protagonists‘, out this Spring.

“Something Has To Give” echoes one of the central themes at play in the album. A record that dwells on the prospect of new beginnings, it’s also one that touches on the trials and tribulations of love, tricky family relationships, and the feeling of being trapped by the past. Owing its title to songwriter Adam Houghton‘s magpie-like method of writing, the album places prominent characters, fictional and non-fictional, into dystopian worlds with new and uncertain outcomes. Opening up about the album Hougton explains: “My process has always been taking inspiration from everything around me including but not limited to TV, Books, Movies, Newspaper, Articles on Wikipedia, Crime Documentaries etc. I then use these sources to craft fictitious stories around an imagined persona. The title ‘Protagonists” seemed to work with this method.”

Blurring the lines between fantasy and reality, while traversing a broader spectrum of genres and sounds than ever before, ‘Protagonists’ will provide plenty to pore-over for fans new and old. Recorded and mixed by Michael Whalley and IST IST at Milkshed Studios, the album was mastered by the legendary Greg Calbi and Steve Fallone at Sterling Sound (The National, Yeah Yeah Yeahs, Interpol).

Touring the  release, IST IST will be hitting the road for a run of UK headline shows in Glasgow, Newcastle, Nottingham, Birmingham, Bristol and London, plus a set at Whitby’s Tomorrow’s Ghosts Festival in April. The Manchester band will also be playing an unmissable hometown launch show for ‘Protagonists’ at the O2 Ritz on 31 March. All dates and details are below:

Tickets will be on sale now here.

Established in late 2014, IST IST have forged a formidable reputation on the back of uncompromisingly intense live shows and a fierce DIY work ethic. Releasing their debut album ‘Architecture’ in the midst of the pandemic on their own label Kind Violence Records, the LP found significant success in the indie, physical and vinyl charts.

Second album ‘The Art of Lying‘ was released in November 2021, peaking at number 87 in the UK Top 100 and firmly establishing the band as one of the leading lights of a new era for music born in Manchester. The release was followed by a ten-date UK tour including sold out shows in Manchester, London and Bristol, as well as a string of sell-out European dates too. The band will release their much-anticipated third album, ‘Protagonists‘ in 2023.

A compulsive, character-driven record from a band hitting their creative zenith, IST IST will release ‘Protagonists’ in Spring of 2023. Listen to the new single “Something Has To Give” now: